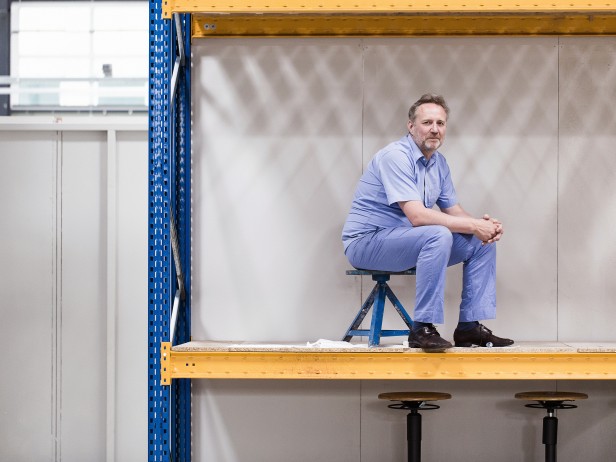 ONZIJN – Curated by Jurgen Bey is an exhibition comprising eleven inspiring projects in which designers react to their environment as they depart from an existing work. ONZIJN takes place in and around WOW’s building in the Kolenkitbuurt in Amsterdam West and puts this unique location at its heart: hotel, art factory, meeting place. The designers each stand for their own theme and were selected by guest curator Jurgen Bey, director of the Sandberg Institute and designer at Studio Makkink & Bey. The themes originate in WOW as a temporary habitat for both the artists and the hotel guests alike, playing into the characteristics of the place, the potential for community and short-lived togetherness.

The building and direct vicinity of WOW transform into one big exhibition space for the duration of ONZIJN. With the eleven existing artworks, Bey reflects on WOW’s context: hotel, home and place of encounter. Life at a hotel is temporary and therefore has its own position and rules. An example of a hotel as inspiration and meeting place for artists and free thinkers is the world famous Chelsea Hotel in New York City. This may serve as an upbeat to WOW, constantly asking the question of what such a place can mean for its surroundings. In what way does it want to serve the city through its visitors?

The exhibition is part of the series Curated By… for which guest curators are asked to make a selection of interesting artists or designers within a specific theme chosen together with WOW. Previous curators include Aziz Bekkaoui (REFLECT) and Sigrid Calon (PRINT). Every exhibition focuses on a different discipline, reflecting the diversity of artists in residence at WOW.

Jurgen Bey (Soest, 1965) is a Dutch product designer. He graduated from the Academy for Industrial Design in Eindhoven and taught at the same institution from 1998 through 2004. In 2004-2005 he was responsible for the Man and Living department. Bey’s work consists of designing products, furniture, interiors and furnishing the public space. His work is produced within his own studio or by companies such as Droog, Koninklijke Tichelaar Makkum, Moooi and Prooff. In 2002 Bey founded Studio Makkink & Bey together with architect Rianne Makkink. They won several awards, including from the Prins Bernhard Cultuurfonds in 2005 and the Woonbeurspin in 2008. Products and installations by the pair have been purchased by Centraal Museum, Utrecht, amongst others. Bey has been director of the Sandberg Institute, the master department of the Gerrit Rietveld Academy, from 2010.

Studio Makkink & Bey is led by architect Rianne Makkink and designer Jurgen Bey. The studio works in various domains of applied art and includes public space projects, product design, architecture, exhibition design and applied arts. Supported by a design team, they have been operating their design practice since 2002. The ambition of Studio Makkink & Bey is to see the role of the designer expanded to the most strategic function possible. To this end, our design team includes professionals from many different fields of knowledge; forming alliances with other designers, architects and experts. The design strategy of Studio Makkink & Bey is to re-appropriate what is already present in the context of an assignment, with a strong emphasis on the process. These contextual elements aren’t just rearranged within one product, but also on the scale of a building, a landscape or a social work environment.

One single product can progress into a project of a larger scale, motivating its own setting. In reverse, a project on the scale of architecture or urban planning can equally produce a series of products related to their original context. This movement of zooming in and zooming out marks the interaction between the domain of architecture and urban design and the domain of products. Urban planning, architecture, landscape architecture are indissolubly bound to product design. The light bulb has had an influence on architecture, the way a house is built will inevitably influence its interior. Did the invention of elevators give rise to the skyscraper, or did high-risers necessitate elevators?

The following weeks all participants of the project will organise activities to activate the project. Click here to see all activities related to ONZIJN.