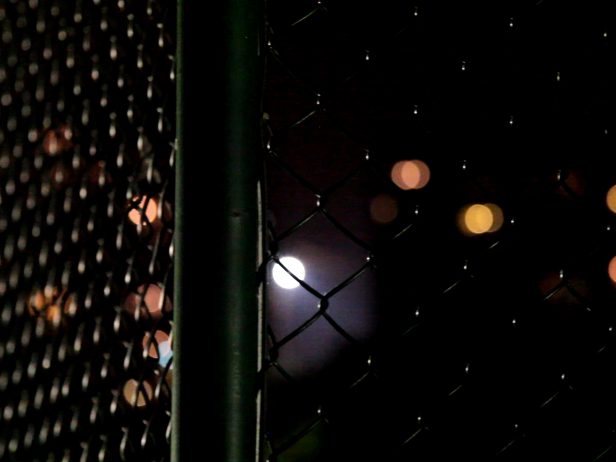 We Only Come Out at Night

The exhibition ‘We Only Come Out at Night’ was born as an attempt to conquer and win the night with a series of screenings starting in the evening and continuing until the first morning lights. The choice of the night as presentation moment was dictated by the desire to challenge the audience circadian rhythm, and the feeling of tiredness. For when one experiences fatigue, many neurological processes, including motivation, pleasure, cognition, memory and learning will be accepting ideas and paths of thinking that might otherwise may not be intercepted. In ‘We Only Come Out At Night’ the time space between sunset and sunrise is intended as a necessary main opportunity to question oneself, to investigate reality and stimulate understanding through different, challenging, points of view.

The works presented offer an unexpected point of view on our society, its fears and desires, always carefully considering the perspective of the viewer.

An endless night in which moments are forced to repeat cyclically over time become palpable in the works of Ali Kazma. In his video ‘Play’ the audience is taken into a haunted world where the borders between the past and the present, the original and remake, real and representation are skilfully blurred: a world of ghosts that evokes contemplation on memory, loss and death in a never-ending replica of Shakespeare’s ‘Hamlet’ emphasised by the performance by the Wooster Group.

The relationship between man and nature investigated by Inge Meijer lives on fragility and intuition: the ability of the artist to unveil different levels of thought and contradictions through the representation of a relationship or an apparently simple natural event obliges the viewers to re-contextualise their point of view. In her work ‘If You Go Down the Woods Today’ a sequence capturing the daily exercise of a retired show animal and its owner reshapes into metaphors of compassion and supremacy, revealing the complexity of captivity.

Ideas and paths of thinking that accentuate questions about the role of images in current and historical events, engaging on visibility and representation are evident in belit sağ and Pierfrancesco Gava‘s works. Pierfrancesco Gava’s ‘Mare Nostrum’ was developed during a collaborative research with the refugees’ collective We Are Here and it’s composed of footage found on YouTube: the work deals with several aspects and consequences of migration from Africa to Italy for both the refugees and the hosting country. The work also draws attention to the context of the footage’s initial publication and circulation, largely driven by the media, which decide what to and what not to show in an effort to sway public opinion.

Belit Sag’s ‘And the Image gazes back’ is an attempt to talk about our relation to images and vice versa in a loose, associative manner: the events mentioned in the film and their representations resonate in our own memories from media while the visible and the unseen, audible and mute, imaginable and unimaginable becomes tangible.

Each video will be on show for 2 weeks in WOW’s Green Gallery.

This exhibition is realised in collaboration with De School, where works by Giovanni Giaretta, Christian Niccoli, Astrid Nippold, Salla Tykka will be on show between March 1st and March 30th.

We Only Come Out at Night was developed and curated by Marco Nember (Blue439 Foundation) and realised in collaboration with the Istituto Italiano di Cultura Amsterdam, Fins Cultureel Instituut and Goethe Institut.