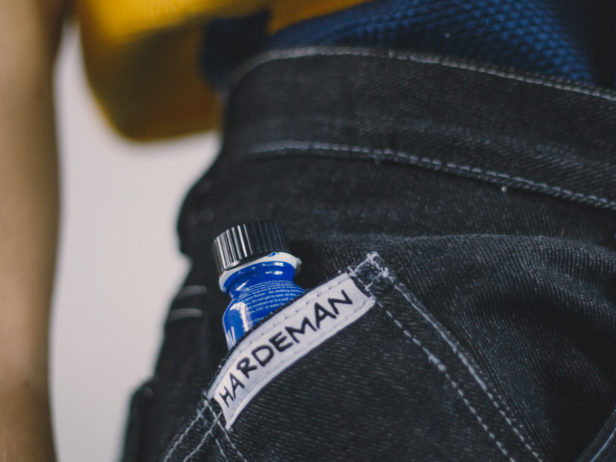 Perfume Launch: Out of the Blue

A fragrance for Hardeman by Klara Ravat

After an intense collaboration, fashion designer Sophie Hardeman and olfactory artist Klara Ravat are proud to present in WOW’s Green House the first fragrance from HARDEMAN, Out of the Blue.

Out of the Blue is a genderfluid perfume bottled in a 10 ml flask. The fragrance is a salty fresh water splash which prolongs its warm and woody pleasurable core, pulsing your adrenaline up to your head.

Petting your skin, like the denim that hugs your thighs, Out of the Blue intensely penetrates you.

Klara Ravat is an olfactory artist and experimental filmmaker based in Berlin.

By opposing the division between the realm of memory and the realm of experience, Ravat absorbs the tradition of remembrance art into daily practice. By investigating the concept of landscape in an adventurous and exploratory way, she wants to amplify the wonderment of the spectator by creating compositions or settings that generate tranquil poetic images that leave traces and balances on the edge of alienation and recognition.

After studying qualitative trend research in Barcelona Klara moved to The Netherlands where she graduated with a Bachelor of Arts (ArtScience at The Royal Academy of Arts). At the same time she studied Psychology at the Open University of Catalonia. Klara is the co-founder and director of the Smell Lab, a community project that focuses on the investigation and practice of the art and science of the sense of smell. In 2017 she teamed up with the Institute for Art and Olfaction to co-produce the first Experimental Scent Summit and recently concluded a 1 year residency at Mediamatic, Amsterdam, supported by the AFK.

Sophie Hardeman graduated in 2015 from the Gerrit Rietveld Academie. She chose to study fashion because it is according to her “the most catchy and adaptable visual language”. That adaptability is directly interpreted in the versatility of her clothing, made for all sundry, high and low.

Fashion is for her a way to investigate the world, and to reflect upon it. She uses in her design symbolism which re-occurs in daily life, getting inspiration by people on the bus or at the market. Therefore, jeans are important in the Hardeman Language, as a point of recognition.

Hardeman describes her brand as “gender-free” rather than gender neutral. “That’s why my sizes run from XXS to XXL – it’s whatever you feel good wearing on your body”. She uses denim to break all conventions. She takes everybody’s favourite material and transforms it into deconstructed, gender fluid clothes that could not be further from your 501s.

From cowboys to catwalk, HARDEMAN is the Dutch designer challenging the American denim history. With drag bar presentations and cowboy inspired films, HARDEMAN announces a re-revolution for the jeans as a symbol of freedom.