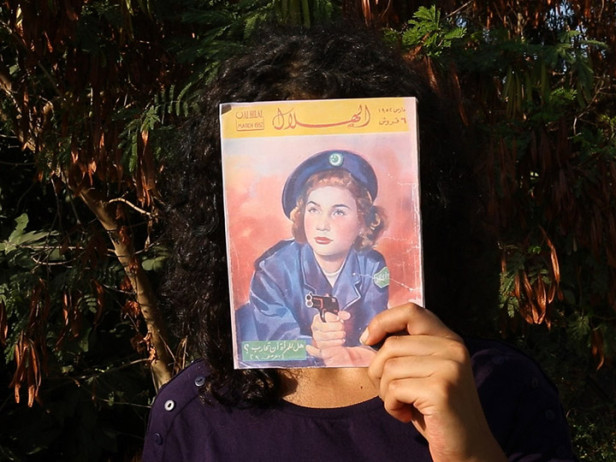 Have You Ever Killed a Bear – or Becoming Jamila

A video performance (2012-2013) that uses the history of a magazine (Cairo’s Al-Hilal 50s and 60s collection) as the starting point for an inquiry into Jamila Bouhired, the Algerian freedom fighter. From the different representations of Jamila in Cinema to her assimilation and promotion through the magazine, the performance attempts to look at the history of socialist projects (Egypt), anti-colonial wars (Algeria), and the way they have promoted and marginalised feminist projects. Naomie Pieter performs AFRODisiac.

Naomie Pieter is currently studying at the SNDO – School for New Dance Development in Amsterdam and describes herself as a black artivist. She has created several performances such as AFRODisiac in which she connects history with the present. In her work, she aims to disrupt spectatorship and to unearth the unequal between, black and white. Guided by her ancestors she evokes their spiritual energy to unite them with the audience as they chant for a better future.

This work is screened as part of the side programme around Guess Who’s Coming to Dinner Too?, an installation by artist and activist Patricia Kaersenhout and concerned with overlooked histories of Black women.