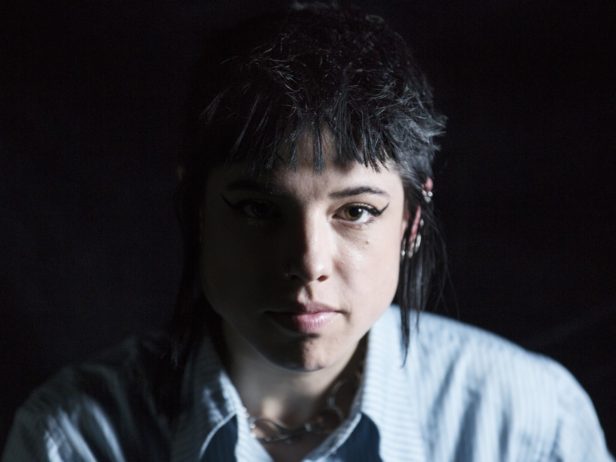 A girl strutting across a runway in New York, bright white underwear showing thanks to the denim skirt turned upside down, covering everything from the waist up. A motley crew of denim-clad friends looking for a chain smoking, gun-wielding girl in the streets of L.A.

A man wearing cut off jean shorts with one pocket lining riding up across his chest. Sophie Hardeman’s denim brand straddles a fine line between fashion and art, crossing over both ways at will, a back and forth between conceptual art and socially conscious design, defying definitions along the way.

Most of us are only just coming out of our post-holiday January daze, but Sophie is already working day and night to get her new collection on the road. It’s almost February, after all, and in the fashion world, this can only mean one thing: New York Fashion Week.

“It’s basically been a crazy, awesome mess since I graduated in 2015. My work was picked for the V-Files Runway in 2016, getting a lot of press, and since then I’ve been following that life cycle of working towards a show, presenting work, and then selling the collection. And the new show is almost here!”

Despite the rush of people in the studio and possible pre-show jitters and worries, Sophie is a bouncing, human vessel of positive energy. Her short, black pixie cut and sharp black eye liner compliment a bright green sweater and chunky chain necklace. She’s probably not your typical fashion designer, but then again, what does typical even mean? It’s a condition Sophie tries to defy with everything she does.

Originally from Arnhem, Sophie studied fashion at the Rietveld Academy in Amsterdam; an art school where fashion is never just that.

“For me, it’s really important that my work is not just about clothes. It’s everything: the performance, the shows, the videos. You take a concept and put it into every single layer of a collection. Your clothes need to come alive, a blouse needs to come off the hanger, have its own life and own identity. I wouldn’t say fashion design is art, but I would definitely say that I’m artist. Who is also a fashion designer. Does that make sense?”

One look at Sophie’s previous collections confirms that yes, it definitely does. Her brand is rooted in denim: a basic, accessible material almost everyone can relate to. But Sophie likes to (sometimes literally) turn things upside down, and explore what’s underneath.

“With Out of the Blue, my first collection, I was trying to find everything we think of as ‘normal’, and put a question mark behind that. Everyone follows certain regimes and structures, playing a role, but we hardly ever stand still to wonder why. You dress a certain way because of the kind of person you want to be, or the kind of job you have. Everyone is consciously or unconsciously trying to be normal within their own perimeter of society. That’s really stressful, and it makes you insecure. Fashion makes you insecure, it wants you to buy something to feel better.”

With a common but storied material like denim, Sophie hopes to shift that sentiment.

“Jeans have always undergone a revolution, and have been a symbol for new radical movements and new waves of free thinkers. So in a way, I am trying to re-revolutionise denim pieces. I’m not sure I can say that I’m actually doing so, but I’m trying to!”

Besides the intriguing and unconventional pieces and refreshing shows, the brand’s gender fluid designs are a sure way to spark another kind of revolution, both on and off the runway.

“I really don’t understand the separation between men’s and womenswear. Even when I was a kid, it felt wrong and boxed in, and people aren’t like that. It doesn’t feel natural to me, and a bit offensive sometimes. It takes you back to the discussion of what’s ‘normal’. That white picket fence dream doesn’t work for everyone. And it’s not just about being gender-free, but also about doing what feels right for you.”

The collection set to debut at this season’s New York Fashion Week takes another common piece of clothing out of its context and into the sphere of Sophie’s creative, all-inclusive world. It’s a polo shirt, not usually associated with high fashion, but if anyone can take this garment from the golf course to the runway, it’s Sophie. The collection is inspired by the Lo Lifes, a Brooklyn gang in the late 1980s that would steal Ralph Lauren polos and wear them as a status symbol, or perhaps as a reminder that there was more to life than their predominantly poor neighbourhood.

“I used to hate polos, but a lot of people wear them, and lots of different kinds of people as well. It was a way of zooming in on this culture and context, areas I don’t really know that much about. There’s always something interesting to find in the things you don’t know.”

In the 1,5 years at WOW, Sophie has had plenty of time to explore the unknown. Different artistic practices, for example, or exploring new ways of expressing the brand’s identity.

“It’s been amazing to live here. I’ve met so many fascinating people to work with. Whenever I need something like graphic design or printing there’s always someone around who has an idea and can help. And I’m even making a perfume with Klara Ravat, an olfactory artist who used to live here! It’s a really interesting and different creative process because how do you translate what I do into smell? Some of the things I want to express with my brand don’t necessarily smell good [laughs].”

The perfume will be launched on 23 February, and might just be the start of a far more extensive Hardeman lifestyle brand. The dream is to stay based in Amsterdam, but open a shop or showroom in New York where people can come try on the clothes and browse different products, and soak up the brand’s contagious, free-thinking attitude.

“I see beauty products: deodorant, toothpaste, floss, or body cream. And basic products like bed sheets, towels, wallpaper, maybe kitchen equipment, or even hot dogs? If I can make a crooked pair of pants, I can make a crooked vegan hot dog. Both challenge the concept of your favourite thing. Whatever comes next, it will be always be something a bit off. That’s what I do.”

That white picket fence dream doesn’t work for everyone. And it’s not just about being gender-free, but also about doing what feels right for you.