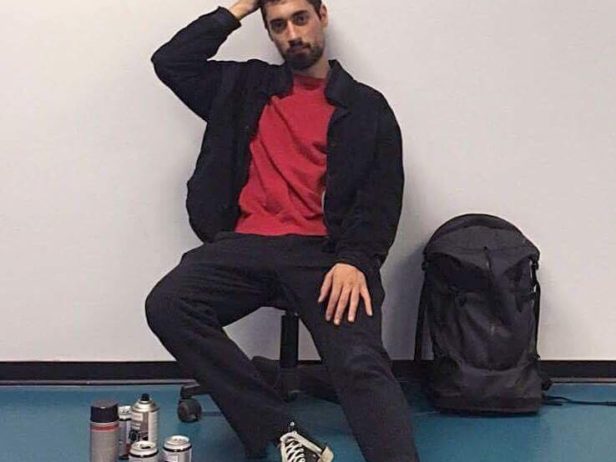 Last week we sat down with WOW Artist in Residence Geray Mena to talk about his work and his recent exhibition Hyper-Focus, on show in WOW’s Vertical Gallery until 31 December.

Let’s start from the beginning. You studied photography in Madrid, then moved around between different European capitals, Paris, Madrid, London. What brought you to Amsterdam, and did the city add something to your practice?

I studied before also in Valladolid, you never stop learning. What brought me to Amsterdam is the calm. I was living in Madrid, which has a good rhythm, then I moved to Paris, a big capital, and afterwards to London, where the rhythm is very different. At one point I really needed some space. In my workflow, I like to ‘boil’ things, to create slowly. It is like cooking when you use good ingredients and give them their time to cook, you can’t go wrong. In London, I felt like I was cooking KFC, while here I know my ingredients and have more time to cook them. I like Amsterdam’s calm and this way of working, so it was a logical step for me to come here. I get more creative when I’m bored because then I start to link the different dots and work.

How would you compare London’s and Amsterdam’s art scenes?

London to me felt like a bunch of hamsters running around and competing with each other. In Amsterdam is way more relaxed, people are walking calmly. My experience is deeply connected with studying at the Rietveld Academie, there the way of working is more collective. Another important aspect is that in London your day always has a tight schedule, commuting time is longer, here there is a bit more space for randomness.

You talk about the way of working being more collective in the Netherlands, and now you’re also living in a sort of artistic community here at WOW. How do you find yourself in this environment?

There are nice vibes here in the building, depending a bit on your fellow residents. I like this neighbourhood a lot, maybe it is because of my Spanish roots, but I get along well with the mostly Turkish and Moroccan population. I think it is way easier to approach them compared to other ‘colder’ nationalities. I also like to live in a sort of working-class environment, because those are my origins, posh is not my vibe. Of course, sometimes I feel like a penguin in the Savannah, going around with more designer clothes and being influenced by trends more than many other people in the neighbourhood. However, I do my best to be more of a chameleon.

You worked with painting, graffiti, and you are now working mostly with photography. What makes you choose between these media?

I started painting as a kid, such a cliché. Then I went into the streets with graffiti, and I felt like I was talking to someone, graffiti is a very specific language, that you only know if you’re in it. After, I started photography because I needed a low cost and flexible tool. Painting requires a studio and lots of tools, but with a camera you are free to go wherever you want, and people around you don’t know if you are just a tourist taking pictures or a professional photographer.

Yes indeed. You can be really ironic and flexible with it, and that was important for me, to have a medium with which you can be free, travel and build up projects. I change medium all the time, my last project was more writing and performance, and the exhibition now at WOW relies more on photography and graffiti. The medium depends on the concept and topic, media are like different languages, depends on what you want to express.

Let’s talk about Immortal, your last project in CentroCentro in Madrid. Those are the pictures you took in the last three cities you lived, what made you at one point look at all these pictures, and realise it was a project on its own.

I moved to Paris and I had a lot of time, because I had no work, no money, basically nothing to do. I started to reflect a lot about what was I doing and why I was producing art. At some point, I linked all the works I’ve done so far and the one common point was this idea of perdurability and leaving a trace. I started from knowing who I am with my first project Quick Snap, about my family and myself.  Once I knew who I was, then I had to ask myself, why I was here, that I did through Immortal. Now I want to go further, which is what I try to do with this new really introspective exhibition. I want to go beyond the material.

Art as therapy is the big frame of Hyper-Focus? What was its starting point?

I want to make a better world, and I think that if you start by trying the impossible, then you can reach the possible. Maybe something happens because of this exhibition, maybe it will fail. The idea is inspired on mandalas, paintings that have been studied in eastern society, which is a bit more evolved spiritually than ours. Western society was deeply limited by Catholicism, which believes that God is outside of us. While I do believe in God, I also believe that it is inside of us, made by us. We just need to listen to it, even though we are busy with our lives and are too attached to material things. I asked myself what is left once you take the material part away.

It is kind of a contradiction that nowadays we are so into our image, but so disconnected from our actual self.

We are too busy to look inside, we care about how we look. It has been like this for a long time, but before your outer image was supposed to be a mirror of your inside, not the core of yourself like today.

See more of Geray’s work on his personal website.