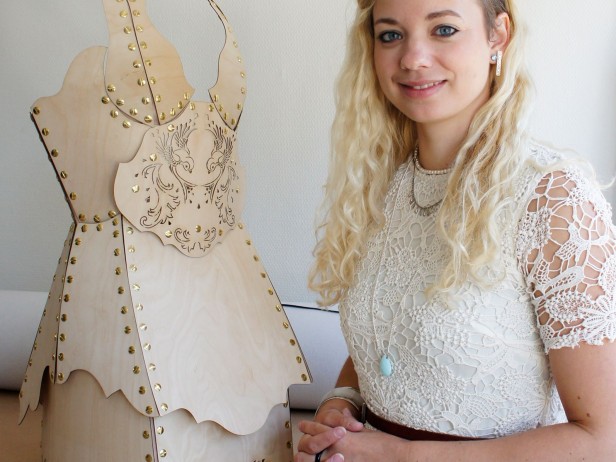 Winde Rienstra, unlike some of her equally successful peers, did not know what she wanted to be until relatively late. Somewhere in her late teens, a performance at Oerol (the annual theatre festival on Terschelling) made her realise her calling: it had to be fashion. But it wasn’t just the costumes that attracted Winde. ‘’I loved the way they used the space and created a complete image through their set designs’’, she says. ‘’But I didn’t want to do theatre. I’m all about real emotions, inspired by my designs, the atmosphere at my catwalk shows and by seeing the garments being worn. The enacted sentiments of theatre are not for me.’’

So she studied fashion at the Hogeschool voor de Kunsten (University of the Arts) in Utrecht. Winde fondly recalls a first-year assignment: ‘’We were asked to pick a building and design an outfit inspired by the shapes. I went for Le Corbusier’s Notre Dame du Haut. I still find architecture hugely inspiring; I think in terms of three-dimensionality instead of flat planes on the body.’’

Hearing this, you might be forgiven to think Winde should be doing something else. This she refutes: ‘’Although my influences come from architecture and visual art rather than fashion, I didn’t dare study art. I thought, at least I’ll know a trade after this.’’ This down-to-earth approach, however, does not translate into Winde’s work: her clothing often builds on meticulous handwork. ‘’Yes, handwork is involved and I think that’s definitely an important aspect, to realise how many hours of work have gone into what you’re wearing.’’

When asked what she looks forward to most at the MAF market, the response is modest: ‘’I’ve never sold items in this way. Are people going to buy my stuff? What will their reactions be?’’ Generally at WOW, Winde is inspired by other artists working around her. ‘’They’re like-minded souls.’’ Sometimes they can work together, like when Diede Claesen wore her coat for an album release show at the Sugarfactory earlier this month. Not everything is wearable, though: uncommon materials, such as wood, are as much part of the syllabus as conventional fabrics. ‘’There are always a number of wearable pieces in my collections, but it’s not a must. I couldn’t work like that. It’s too restrictive.’’

Winde Rienstra (www.winderienstra.com) is artist in residence at WOW. A highly successful fashion designer, she has exhibited in the Brooklyn Museum, New York while eight of her pieces were purchased by Centraal Museum, Utrecht as part of their collection. On 30 May she sells some of her accessories on the market, including bowties, collars and necklaces.

I'm all about real emotions