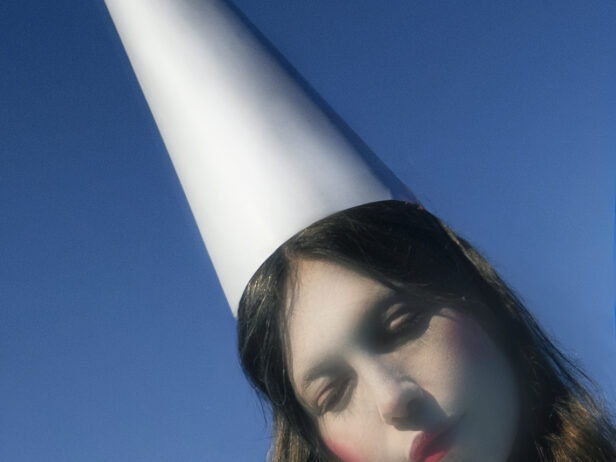 The conversation between Vladlena Sandu and Roman Ermolaev took place on the 15th of May 2022.

Things have changed a lot since then and changing every day, if not an hour. Despite that, we think that the idea behind this text and the ideas running through it keeps its relevance and can be counted as a document which deserves to be published.

Vlada and Roman are living in WOW Amsterdam/Lieven – their conversation translating their personal thoughts on unfolding situation.

The first picture is of Vlada, 4 years old, living in Feodosia,Ukraine. The rest of the photos show Vlada as 40 years old. She now lives in Amsterdam. As for the images of the clown, let it remain as a reminder of a childhood not yet frightened by the images of war. 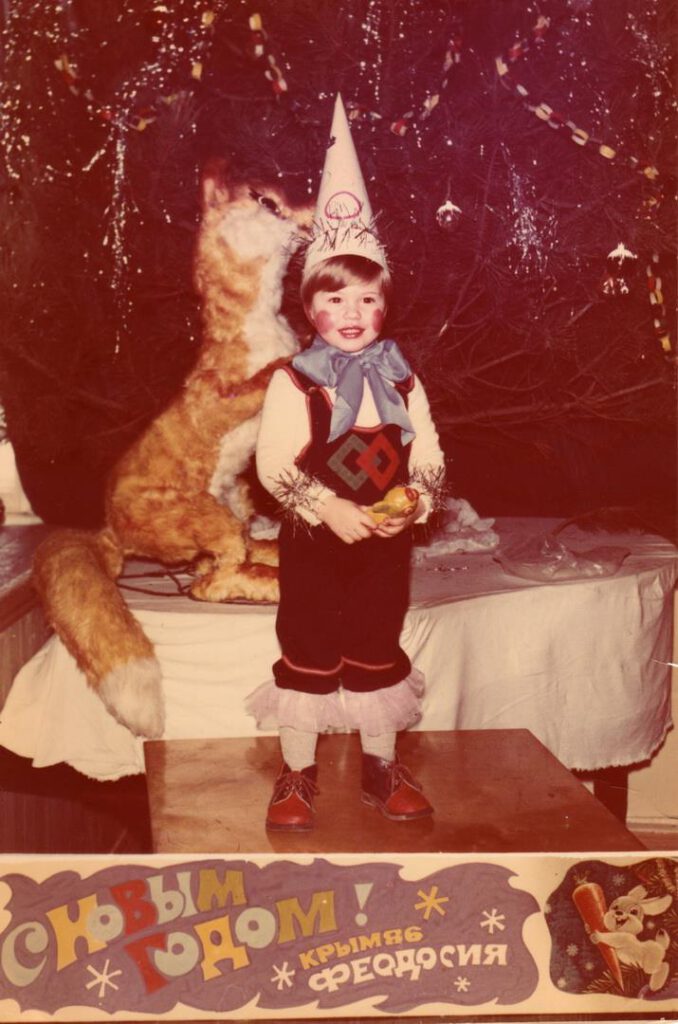 -Man historically thinks about his life in the context of what is death. Death has in it the function of the awareness of one’s own demise – time then becomes valuable. Otherwise one can live only instinctively, without being aware of this very fact. The educational system, which was formulated and shaped by the soviet and putin regimes, has done everything to make people unaware of time, mortality and its significance.

-One of my first toys was a human skull. I loved playing with its teeth, sticking my fingers in its eye sockets. My dad traded it at a flea market. I was four years old at the time.

-I assume how much time is given to me.  Then I can allow myself whatever I can afford, as long as I don’t mean any harm by it. It is always a choice. Though choice could be only realized in a state of freedom.

-I understand the taste of war very well – it is a very luscious thing. It is the most cynical thing you can say about it. It is the kind of truth that is very unpleasant and painful to realize and articulate. 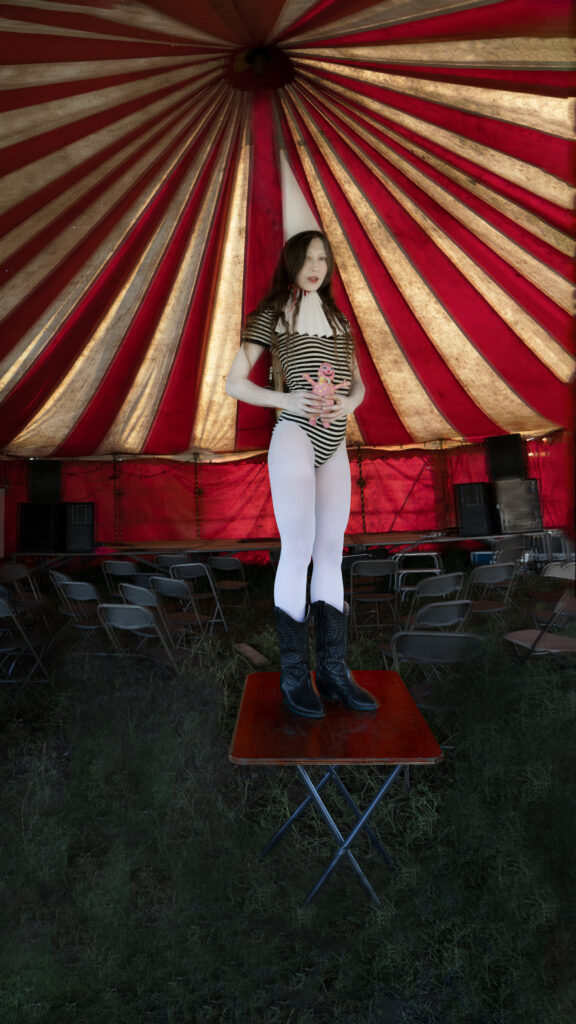 -What is war after four years of living in the war? It is an addiction. It’s when you become obsessed with the idea of going back to war under any excuse. In general, life there – it’s different. There you understand that love is here and now, everything is here and now. Anything you can say to a person, you can say here and now.

-It is impossible to help anyone in war. It is impossible to help people who have made the decision to stay and live through the war. They do not want to break away from their home, from their past, from the fact that they do not see the possibility and prospect of building a new life. People who have children and  who decide to stay in the  war… it is a direct violation of children’s rights. Children can not choose war.

-As war children, once a year we were sent to a children’s camp supported by the Russian state. And in these children’s camps we spent most of our time in front of the TV watching the news about what was happening in Chechnya – we all had parents there. The news aired only from the position that the Russian army was destroying terrorists in Chechnya. From the camp we were taken back to Grozny,and then we were destroyed as terrorists ourselves.

-After a screening of my film Holy God in Leipzig, a young man asked me a question, a very simple but fundamental question: “Why did your relatives decide to stay in the war?” This is a very important question, one that in principle had never occurred to me before.

-Why didn’t your relatives leave?

-My grandfather told my grandmother: “Nadia, we built this house, we are going to die in it. So we ‘died’ in this house during the war. My grandfather thought: “If we have to die, we will accept death with dignity, not be covered with earth, not die of hunger,” so we did not go down into the cellar.

-There is nothing in this life that can justify war, because war is something that devalues the most important thing – life.

– Since February 24, I have been in a lot of pain. It is comparable to experiencing the death of my grandmother as there are people,my friends who have lived by my side all my life. It was always there – and suddenly it’s gone. Sometimes I pick up the phone, start calling and realize: my grandmother is gone. That’s how one comes to understand the time when something is no longer possible.Like a call. After February 24, a lot of things became impossible.

– My friends and I saw each other for the last time just before the war, and now everyone is somewhere… – all over the world. We had other plans for life. I look at the photos taken just a week before the war and think: how naive we are here.

-You should always be honest with yourself. Everything you do, you do for yourself. The more you are weak-minded, the more you hurt yourself – that’s all.

-In a moment of direct complicity, it is very difficult to know who is right and who is wrong. The war must be stopped, then the guilty parties must be sought.

-There is a man who became popular as a writer in Russia in the early 2010s. I read a few of his things about Chechnya. It struck me then that the author is not aware of the war tragedy. The man writes books. These books are sold all over the country. And it is considered normal. This man is apparently afraid to articulate the war as an absolute joy,considering that he earned his living as a hired gun in Chechnya. And today this man has been openly inciting war in Ukraine since 2014. His name is Zakhar Prilepin.

-“People who express their position against the letter ‘Z’ are not normal people. They should be sent to concentration camps and sterilized”, words spoken by Karen Shakhnazarov on the Federal Channel. I used to love his films. Now it all feels like moral chaos.

-Although all my work is closely related to the social and political context, I used to allow myself to think that art could be outside of politics, that there was “pure” art. This position was no longer possible after 24th of February.

-At this year’s Easter service in St Nicholas Church in Amsterdam I was surrounded by people: happy smiles and joy over the Resurrection of Christ. But not a word, not a word about our brothers and sisters in Ukraine either from the priest or from the congregation. I left the Easter service. The next day there were pictures of Kira and her mother Valeria, murdered in Odessa on Easter night.

-Before that, your dad lived with you for twenty-five or thirty years, and suddenly they tell you he’s a maniac. You think, “Well, they must have made it up, why should I believe someone other than my dad, who I know, and he, my dad, didn’t abandon me. But then, what if I suddenly accept that he is a maniac after all? How would you live with that? Is it okay to go home? Can you sleep in the next room then? Imagine that you suddenly realize that your dad is really a homicidal maniac. You just know it at the moment. But once you’ve realized that, it’s impossible to go on living in that. But there’s another important point here: in this story the president of Russia is not the father. But in the last twenty-two years the worst thing has happened: he has created the illusion that he is. The war against Ukraine confirmed: he is a maniac. When I realized this, I decided to leave. I just said to myself: “No, it’s impossible. I can’t justify it.” 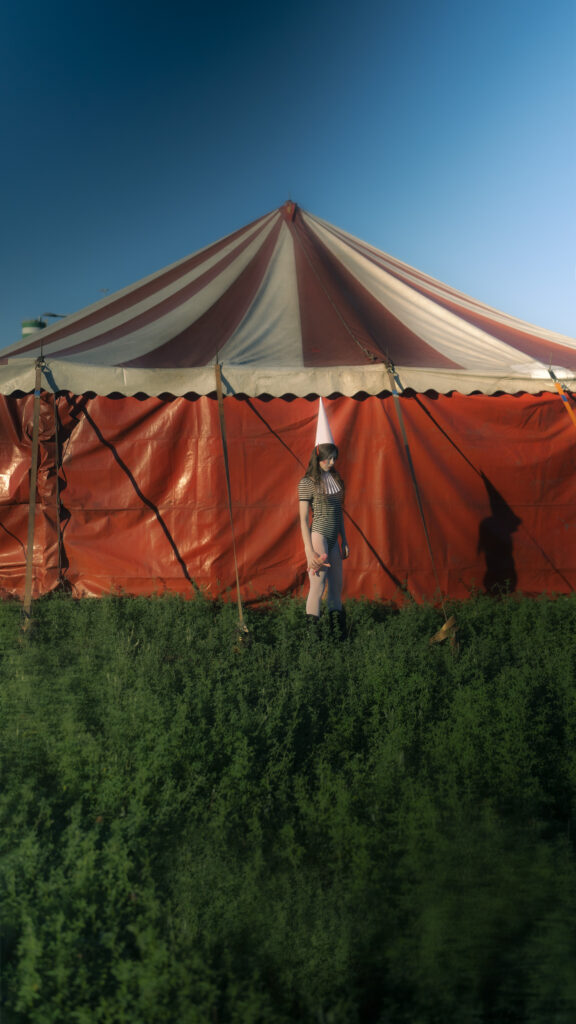 Vladlena Sandu was born in her Father’s homeland of Ukraine, Crimea in 1982. After her parents divorced, she moved to her Mother’s hometown of Grozny in the Chechen Republic. She spent four years at war as a child and teenager. In 1998 she immigrated to mainland Russia and received the status of an internally displaced person.

In 2011 she graduated from Rodchenko Art School. In 2016 she graduated from the VGIK, where she studied film directing on a BA course led by Alexei Uchitel. In 2019 she completed Boris Yukhananov’s Studio Of Independent Direction.

Vladlena Sandu’s VGIK debut short fiction “Kira” received the jury’s special mention award and critic’s choice award at Kinotavr 2015, as well as awards for best direction and cinematography at VGIK IFF 2015. She graduated with a short documentary “Holy God” that was produced by Rock Films. The film received production funds from the Russian Ministry Of Culture but failed to pass censorship laws and struggled to obtain a distribution certificate because of the issues it raised. “Holy God” was awarded at multiple national and international film festivals, including Apricot Tree IDFF and ZagrebDox 2017. The film saw its international premiere in official competition at Leipzig DOK 2016 and was in official competition at Rotterdam 2017.

Her latest short film, “Eight Images From The Life Of Nastya Sokolova”, saw its world premiere in official competition at Rotterdam 2018 and won Best Short Film at its Spirit of Fire 2018 national premiere. In 2018 this short docufiction, co-directed by Alina Kotova and produced by Kosmosfilm, also screened in official competition at IndieLisboa and was awarded for the Best Eastern and Central European Short Documentary with the Silver Eye Award by the Institute Of Documentary Film.

In 2019 she wrote and directed an eight-part series for TNT-Premier in Russia – «Identification», that saw its world premiere in official competition at Series Mania. In 2019 the series was also presented at the Moscow IFF, in official competition at Geneva IFF and the Berlinale in 2020, as part of the European Film Market. As part of the Berlinale 2022, the re-premiere of «Identification» took place in the special program Series Select. The project had successful criticism from professionals and viewers.

Vladlena is currently pursuing a Postgraduate Art degree at the VGIK in the department of Aesthetics, History, and Theory of Culture. The subject of her dissertation is “The artistic representation of spirituality (based on the European films of the XXI century).” She has published three academic articles.

In 2021, her feature documentary debut “Memory” was supported by the IDFA Berta Found (Netherlands).

Since March 2022 Vladlena is based in Amsterdam.