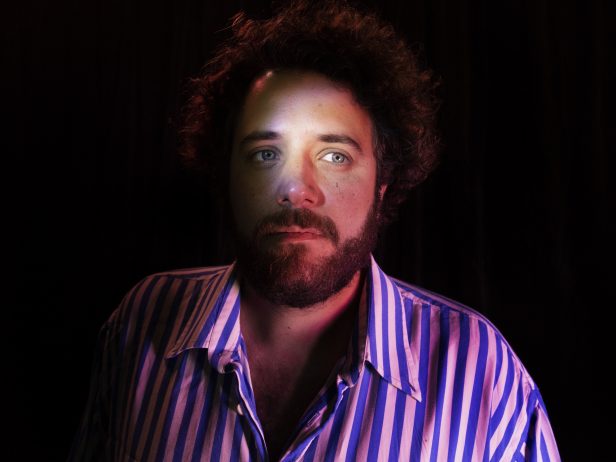 Nicolas Chuard’s illustrations have a big range, from huge, incredibly detailed murals to loose, sketch-like comics, abstract watercolours and simple children’s book drawings. His design work is just as free, but in a different way. Where his drawings are the kind that can find an audience just about anywhere, the design work is more personal, springing from a response to drama and anxiety in a funny, unpredictable way. It’s somewhere in between these two, somewhere between the practicality of commercial illustration and the freedom of design work, that Nicolas feels most at home.

“I really like both the challenge of a commercial assignment and the freedom of working on my own designs. I need both, because they feed each other.”

Nicolas, you’re originally from Switzerland. What brought you to Amsterdam?

School, and I needed a change. I studied illustration in Geneva and started working as an illustrator after I graduated. At some point, I felt like I needed to open my mind a bit more, and perhaps get away from Switzerland for a while. It’s a very nice country, but perhaps it’s too nice sometimes. I would explain Switzerland as a postcard. Everything is gorgeous and pristine, but there’s a price you pay for all that beauty. It’s very strict, and very ordered, if you do something a little outside of the law, you immediately get punished. The Netherlands isn’t like that. Here, it’s a bit messy but there’s room for playing and conversation.

Was school here very different from what you were used to in Switzerland as well?

The Rietveld Academy is the opposite of what I learned in Switzerland. I had a very strict, commercial approach to making drawings, and Rietveld taught me that rules don’t exist. What really blew my mind was the diversity of what people were doing, it might not always be your thing, but you accept their vision, and they accept yours, and then there are no more limits. I was supposed to study graphic design, but in my first year, I discovered what it was to make things with my hands again. It felt like the last step that missing, and going to graphic design felt like taking a step back. So I switched to the object design department, and that was the explosion of my making years.

Are there similarities between your illustration and your object design work?

All of my work is very similar and colourful, usually dramatic and funny at the same time. My design work often looks like it was taken out of a comic, so my objects are really a physical manifestation of my drawings. I tend to find ideas that have stories and narratives in them, which I visualise on paper, and then turn into an object. They’re usually quite simple and funny, and also funny to make. Which is important, to have fun!

Can you describe your sculptures and product designs?

They are always very human, related to the psyche. I like to make fun of the drama or anxiety or some fickle issue, and turn the object into the representation of this issue. My sculptures are usually something you can use. Right now I’m working with ceramics, they’re plates but very unhandy plates, yet you can still eat from them. It’s important to me to create designs you can actually use, and I think my drawings are a bit the same in that they all tell stories based in reality.

Why is that important to you?

I think art shouldn’t be just for artists. I like to reach as many people as possible, and not stay in this little art bubble, otherwise it becomes this game that everybody agrees on. If art happens in the streets, if it takes over more public spaces, more people can see it and it can be more powerful and essential. You have to take art out of the elitist atmosphere of galleries sometimes, take it to a newspaper or the internet or the street, somewhere everyone can see it.

Would you describe yourself more as an illustrator or as an object designer?

Definitely both. I hadn’t really been drawing during those years at Rietveld, when it’s actually really my essence, I think. So I went back to it after graduation and that’s what I’m still doing now, with the occasional design assignment. If I could find a way to do both, one part commercial illustration and one part free design work, that would be ideal. I really like both the challenge of a commercial assignment and the freedom of working on my own designs. I need both, because they feed each other. Frustrations over a commercial assignment spark free work, and vice versa.

Where do you find inspiration for your work?

Usually in my mind, or from conversations or jokes I make and afterwards I realise hey that’s such a visual joke, I can do something with this. Or from dreams. Whenever I lack inspiration, I just go to a museum or on vacation. It’s funny how it’s always exactly those moments when you can’t or don’t have to create, in those moments the best ideas come. And then you have to remember what you came up with, and that’s why I always have a lot of writing on my arms [laughs].

What has it been like for you to live at WOW?

It’s been great! I got to know WOW when I made a light installation for them when they first opened. I’m a very social person who needs a lot of human contact, but at the same time, living with roommates can be too much. At WOW, you can hang out with your neighbour or just choose to be by yourself. I did a few collaborations with other artists in residence, but the most inspiring times are when we’re just talking about our work. It’s interesting, as an illustrator, to talk to a musician about he or she sees his or her work, and notice the differences or similarities. For example, Emmanuel Frankenberg plays the harpsichord and the horn – and when he plays the horn, everybody knows [laughs]. It’s such a ridiculous sound when it’s not part of an orchestra, like bffump bffump bffump. Emmanuel is a Bach specialist, and it was very inspiring to understand Bach through him, there’s an expression in his way of doing it. That reminded me a lot of drawing. You can make a portrait and other portraits of the same person will look similar, but it’s the feelings you put into it while you’re drawing that determine the style. And then you suddenly see this correlation between music and art, and it’s very interesting.

Where do you think you’ll be five or six years from now?

In a beautiful workshop or studio somewhere, with huge windows for drawing and some machines for making, surrounded by other artists. And my agent calling me saying ‘ yes hello, I have an assignment for you’ [laughs]. To be honest, I’d be perfectly content if I can spend half my time illustrating and half my time making. People are always saying how hard it is to be an artist, and it is, but it’s not that hard either. Although you do have to be able to deal with that insecurity, the waves of assignments and quiet periods. I was talking to my brother, who is a graphic designer, about how tempting it would be to accept a 9 to 5 job, have weekends be weekends and get a steady salary. It sounds so soothing. Instead, I wake up at 11 or 12 sometimes and work late into the night. It’s a very bohemian life, and it can be very tiring, but I like it, I think.

I think art shouldn’t be just for artists. I like to reach as many people as possible, and not stay in this little art bubble, otherwise it becomes this game that everybody agrees on.