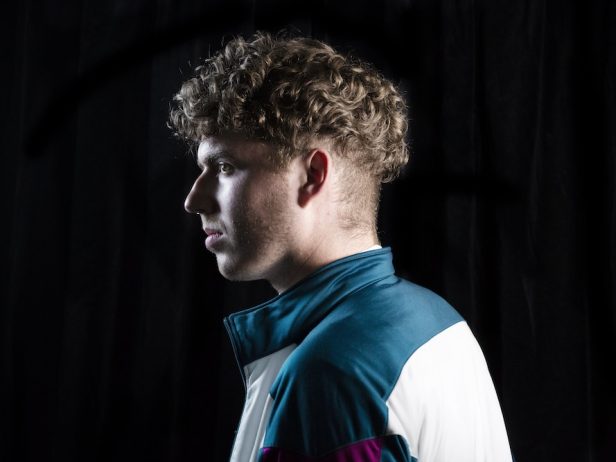 Max Schulze’s paintings are heavy, his writing even more so. Not to carry, but to look at, read and digest. The subjects span from confessional poetry to collages of mid-century photographs and ancient Greek myths. Surprisingly, the young artist in residence prefers to be in a happy state of mind when putting brush to canvas. “I have to be in a good mood to paint, because painting is a very positive gesture. It’s an activity, you’re moving, and you need to feel ok to do that because if not, you won’t get out of bed.”

You graduated in 2016, what has life been like for you post-grad?

I was in that famous post art school black hole for a little while. I assumed I would just find a job or get assignments, but it was much harder than I thought. I did internships and trial days, looking for a job where I could use my creative skills. But you can’t be an intern forever. Eventually, I ended up working at a bakery. I think I found a balance between creating art and having to make money somehow now.

How did you create that balance?

I put less pressure on myself, I just thought: you know what? I’ll figure it out. I’ll get a job, and find a studio to work from, and take it from there. It’s hard to keep things in perspective when the people you graduate with get lots of exhibitions and you don’t. It’s normal to start doubting yourself. Last August, I suddenly got asked for three different assignments, which was the confidence boost I needed. I hate that about myself, but it’s true. I’m working on an exhibition for WOW now, but I hardly did anything before that for months.

Is it harder for you to make work without the pressure of an assignment or a deadline?

It is harder. You look around you and it feels like some people get praised and everything happens for them, and I have to do it all myself. When you make something and get no responses or reactions, that can be tough. It feels like you’re just making it for yourself, which is fun and can certainly be satisfying, but it’s always nice to have your efforts recognised. Luckily, I do feel like I just have to create. I’ve known that since I was three years old. It’s one of life’s bare necessities for me, I can’t imagine a life without making art.

How did you decide on painting as a medium for your artistic thoughts?

Before art school I never even held a brush, I was always drawing. But at school, you have to produce a lot of work. I was a huge perfectionist, my drawings were so small and detailed, and there’s no time for that when you’re producing a lot of work. With painting, you can make big, fast movements and create something more quickly, and it developed from there. We had one painting instructor who insisted you shouldn’t spend more than two or three hours on a painting. That mindset really helped and influenced my work.

And you’re a writer as well?

Yes, I write mostly poems and short stories. I wrote a collection of poems for my graduation project, as an alternative to the thesis, and made paintings on the same subject. I was very much influenced by certain writers, both for the poems and the paintings. People like Sylvia Plath, and some other names I can’t remember. A lot of tragic women, actually. I can’t really explain why I feel connected to them. It might be because they lived in the 50s and 60s and wrote about pretty heavy stuff, which wasn’t normal at the time. They were rebellious in that sense, and you can see some of that in my work. My creations can be very negative, and not many people like to face the negative side of life. I want to show it because it’s reality.

Can you explain that negativity we see in your work?

It has a sombre vibe, dealing with existential questions many people don’t consider much, but I deal with them on a daily basis. I think it’s kind of stupid to be blind to these issues, so I try to make people face them. It’s not a premeditated agenda, I’m not trying to turn everyone into a depressed mess. But I do think it’s something we need to look at more, because it’s just a part of life.

Do you have to be in a sombre, dark mood to create that kind of work?

It depends. For writing, yes. I turn into that cliché tortured soul poet, with the rain streaming down the windows, sitting behind a desk drinking a bottle of wine [laughs]. But with painting, it’s the exact opposite. I have to be in a good mood to paint, because painting is a very positive gesture. It’s an activity, you’re moving, and you need to feel ok to do that because if not, you won’t get out of bed. I think that’s why my writing is even heavier, especially in the winter. Those dark months are hard for me, and I just want to hibernate and not leave the house, so I write. I wasn’t always like this; I was a serious but pretty positive child. I think I just got bitter along the way. No worries though, I’m doing fine! [laughs], I just think it’s unhealthy to bottle up all these negative thoughts. We shouldn’t focus so much on just showing the positive side of life.

Where do you find inspiration for your work?

Those 50s and 60s writers, and right now I’m focused on Ted Hughes, Sylvia Plath’s husband. I find him fascinating, he uses a lot of references to mythology, which I also use in my paintings. I like looking at pictures from his time period and combining them with images of Greek and Roman mythology to set the scene for a painting.

What can you tell us about this exhibition for WOW?

I’m trying to create these collages on the canvas. I find images and put them together, draw over it, so that it creates a sort of puzzle. I like that process because it feels like every painting has a secret, which is true. I’m the only one who knows what the painting is about. I’m also experimenting with painting itself, in the context of these collages. What can I do with a brush, what can’t I do, how am I limited? I make these rules for myself, right now I’m not allowed to draw with a small brush, everything has to be a big. It’s a good challenge. I think the work for this exhibition will be very experimental, almost like research or sketches. I might present it with older work and show what happened in between. It’s a tight deadline, but I think I’ll make it. I already made 10 paintings these past two weeks, while also working at the bakery. This exhibition is very important to me. I’ve walked through this hallway many times thinking how cool it would be if my work was hanging there. And now it will.

Do you have any goals in mind you’d like to achieve these two years at WOW?

I want to find myself in this city, find a balance for my creative life and my other work. WOW is a nice place to do that, because it’s not your typical student house. Lots of people live here but everyone is serious and very focused on their careers, which helps my focus as well. And I’ve been able to do a lot thanks to WOW, things I would never have come across by myself. It really is a launching pad for everyone who lives here. My goal is to be a self-supporting artist. I know a lot of people don’t make it, but I do believe if you try hard enough, if you’re tenacious, you will get there. I wouldn’t even be able to stop, I have to keep going.

You can check out Max’s exhibition CARYATIDS at WOW until July 31st 2018.

“I have to be in a good mood to paint, because painting is a very positive gesture. It’s an activity, you’re moving, and you need to feel ok to do that because if not, you won’t get out of bed.”