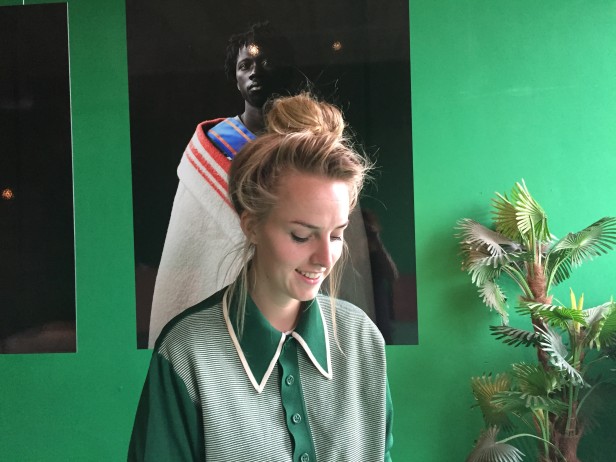 Manon van Hoeckel’s graduation project ‘In Limbo Embassy’ brings questions surrounding Dutch asylum policy to the fore. A mobile embassy where audiences can start a conversation with asylum seekers and an exhibition of state portraits of these ambassadors turn the work into an alternative space for debate, away from national politics and at the heart of society.

NOT HERE, NOR THERE

A sense of frustration was the reason to put asylum seekers at the centre of Van Hoeckel’s final work at the Design Academy Eindhoven: ”Asylum seekers are mainly talked about, not so much talked to.” Public opinion is predominantly shaped by negative news about extremes, Van Hoeckel finds. ”With a complex theme such as this one it’s important to also let the people in question speak, to create mutual understanding and insight.”

In Limbo Embassy refers to the no-man’s-land asylum seekers find themselves in. ”The literal translation of ‘in limbo’ is ‘not here, nor there’. A share of asylum seekers whose request has been denied cannot return to their homeland, for example because it’s too dangerous or the country refuses to cooperate with repatriation. Those asylum seekers are literally in limbo. They’re not allowed to stay, yet they cannot go home.”

Visitors are encouraged to start a conversation with the asylum seekers, present at In Limbo Embassy as ambassadors in their own office. ”I hope the mobile embassy will be inviting and accessible to many people. This project’s goal is to lower the barrier to get in touch with the actual people discussed in the news and in the papers: the asylum seekers themselves. In principle, everyone is welcome at the squats they stay in at the moment, but that step is too big for many,” says Van Hoeckel. ”The embassy and the ambassadors are open to conversation or discussion based on equality.”

THE GOVERNMENT, THAT'S US

State portraits of the asylum seekers as ambassadors form a major part of the work, for which Van Hoeckel cooperated with photographer Alexander Popelier. Blankets wrapped around their shoulders now give the subjects a royal status where that image usually suggests poverty. The pictures were taken in one of the squats the members of WE ARE HERE (a group of rejected asylum seekers in Amsterdam) stay in.

A complaint against the real embassies in The Hague? No, says Van Hoeckel. ”This project is not political. The embassy wants to examine this subject from different angles, and give asylum seekers an opportunity to tell their story. At the same time, I hope to foster social involvement. Often the ‘blame’ or the ‘solution’ is attributed to the government. But the government, that’s us.”

What’s next for Manon van Hoeckel? Does In Limbo Embassy herald similar future projects? ”In my work I often deal with social questions. I’m proud to graduate on this theme, not so much as an appreciation of my achievement but because I have been able to contribute to the Academy’s pledge towards greater social responsibility. I remain a designer, not a social worker. I’m going to continue this project for about one and a half to two years and then hopefully transfer it upon someone else. Aside from In Limbo Embassy, I do projects on commission for organisations and companies, all with the same objectives: creating awareness, drive out prejudice and cultivate debate.”
Manon van Hoeckel is Artist in Residence at WOW Amsterdam.

In Limbo Embassy opened 30 April in the Green Gallery at WOW and is on show until end of July. For more information click here.

We congratulate Manon with her nomination of the Dutch Design Awards 2015!

This project is not political (...). Often the 'blame' or the 'solution' is attributed to the government. But the government, that's us.