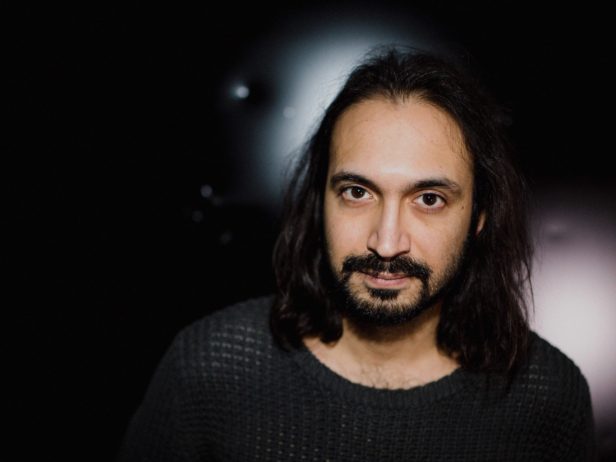 A composer, musician, writer of music, and in his own words, colourer of air. Artist in Residence Kaveh Vares has been studying music since he was six years old, and is well on his way to becoming the ‘next big composer’, even if he might not admit that to himself. Time for a chat!

We meet Kaveh at one of the busiest times in his young career. The brief walk through the lively neighborhood from WOW to Podium Mozaïek and the following coffee and chat are the only break he’ll get for the next few weeks.

“Look! My face is on this chair,” Kaveh smiles as he points at a chair covered on pictures of past performances at the café.

“That’s a sign I made it, right? People sit on me!” he laughs, modest about his achievements. A trait not uncommon amongst the Dutch, and one he likely picked up since he moved here nine years ago.

“I moved to the Netherlands because it seemed like the source of all these thoughts of modern freedom, people like Luther and Spinoza became who they are here. I figured it must be a very open place, a frontier, for modern art as well. Of course, Dutch people are way too down to earth to ever lay claim to that!”

STUDY AT THE SOURCE

Kaveh was born and raised in Tehran, Iran, and left for Armenia to study classical music after finishing a degree in physics.

“That first degree was more something in between, I took the diploma and put it in front of my parents like: ok, this is yours, now I’m going to follow my own dreams,” Kaveh remembers. He had been playing piano since he was six years old, and although Iran does have some music academies and conservatories, for Kaveh, it didn’t feel like the right place to develop his musical ambitions.

“To learn classical music that started in a different culture with such a wide tradition; studying classical music in Iran would be like learning to play the sitar in Texas, you know? You have to go to the source to really get it.”

Kaveh eventually found that source at the Conservatorium van Amsterdam, where he completed one bachelor’s and two master’s degrees in classical music composition and film music composition.

“It was difficult here, at the beginning, everything was so different. But the conservatory is so international, everyone is adjusting at the same time. You can walk into the canteen and learn about so many different cultures, it’s literally the whole world in one school, one city. It’s great!”

It’s that kind of communal creativity that attracted Kaveh to WOW as well, which he joined thanks to a tip from his friend and fellow Artist in Residence Marlies van Gangelen. He’s been here a little over a year, after jumping through all the hoops of getting enough projects to qualify for an artist residence visa. (“I had JUST graduated. It’s a nearly impossible feat for a new composer. But here I am!”). At WOW, Kaveh is currently spending all his time working through those various projects.

“It’s absolutely amazing to live with all these inspirational artists, have talks for hours and hours. Ron Amir, a fantastic charcoal painter, listens to opera constantly and knows a lot more about opera than me, even though I’m composing one. He can give me feedback, and I can chat with him about his paintings. There’s a lot of that kind of thought movement around the house.”

Kaveh just finished the score for Fenix, a new Dutch crime show that will air sometime next year (“it’s a mix between Scandinavian crime shows and Breaking Bad– you need to watch it!”) and is currently working on an opera with orkest de ereprijs in Apeldoorn.

“The opera is called Ontheemd, which means displaced. It’s one act, you see a husband and a wife trying to adjust to life in a new country. While composing, I went against all the expectations of how a modern composer would write an opera, tried to free myself from all the thoughts that told me it wasn’t modern or experimental enough. I pushed the Dutch language into Persian melodies, in a way that all the syllables fall in the wrong moments. It’s an intense opera, with lots of melodies, harmonies, and all the sentimentality that’s usually avoided in Dutch art,” explains Kaveh, almost bouncing off the couch from excitement.

“It’s going to be 75 minutes of constant emotions being pushed in the face of the audience. Maybe they will hate it! Or maybe they will cry. Who knows!”

The contrast between this extravagant opera and his work for film scores almost couldn’t be bigger. Whereas one goes all out, the other is subdued, in the background, serving the purpose of the story being told.

“It sounds strange,” laughs Kaveh, “but most of the time at the end of a film when I ask the audience what they thought of the music and they say wait, was there music? Then I know it was a good score, because it worked in the back of their minds without disturbing them.”

Which, as Kaveh will tell his film academy students the first day of class, is not to say music isn’t important in film.

“Music can change everything. I show my students this footage of a beautiful lovemaking scene, which accompanied by Bach is a natural and loving whole. Then I change the music to Kryzstof Penderecki’s Polymorphia, which was used in The Shining, and it suddenly becomes this psycho horror scene where you think oh god any moment now someone’s going to grab a knife and kill the other!” laughs Kaveh.

When asked about his ultimate dream project, Kaveh leans back on the couch and gets a dreamy spark in his eyes.

“Actually, I’ve been developing this idea for the last eight years, I’ve written some parts. But it’s big, an entire production. I hope at some point to find funding and time to devote a year to this project and work it into existence.”

We hope so, too! If you’re curious about Kaveh’s work, make sure you catch his opera at various locations around the country from 13 January-4 February. You can find more information here.

Studying classical music in Iran would be like learning to play the sitar in Texas, you know? You have to go to the source to really get it.