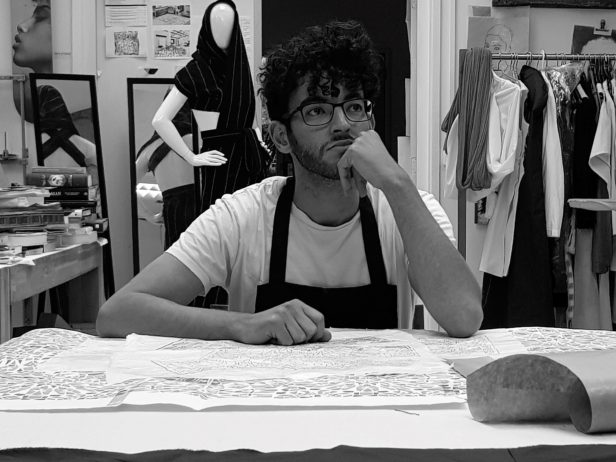 Last month I met the fashion designer Karim Adduchi, ahead of his show “She has 99 Names”, on at the Tropenmuseum in October.

Until earlier this year, Karim and I were neighbours at WOW, where I still live and next door to which he continues to work (in a slightly larger studio). I still remember the first day we met. That morning, I saw him eyeing a large table that had been sat outside my room for months. I helped him carry it over to his new studio, and we chatted all the way down, continuing over a cup of tea.

Since then, he’s brought me tea every time he sees me working in the WOW lobby. I tell him no, but he insists, and usually leaves with a stern word about having my phone on while I work. “How can you work with that thing on?!” he says.

When I met him for the interview, I noticed the table was still there, still marked by the story of our first encounter, and the many pleasant encounters that followed.

In this spirit, for most of our interview we just chatted about our respective days. But, knowing I was there for a particular reason, I slowly pushed him to feed me the more pressing details.

Born to a family of tailors in Imzouren, Morocco, Karim moved with his family to Barcelona in his youth, following his father, who had already moved there for work. He began drawing from an early age and went on to study Fine Art at the University of Barcelona. But, finding this to be a somewhat solitary pursuit, and with his experience growing up around tailors, he switched to fashion design while studying at the Gerrit Rietveld Academie in Amsterdam.

He said of his earlier experience in fine art, from an early age, “I was tired of being by myself, painting and making things, so I wanted to gather people together and do it in a different way.” Now, there’s much more scope with what he’s doing to engage with more people.

That being said, this move from art to fashion really wasn’t much of a move at all, just a transition to a different medium. Indeed, his impetus remains characteristically artistic. This was already evident in his Rietveld graduation show, with the poetic title “She Knows Why the Caged Bird Sings”. In the show, he drew on his Berber roots by re-using traditional carpets, made by the Berber community for thousands of years. He frayed their patterns, incorporated wool and leather, and sculpted the material so that it curved around his female models in twists and turns.

The resonance of the resultant pieces is obvious just by looking at the pictures. These were self-evidently more than just a beautiful material. Like the table, and even more so, they are inscribed with a human experience which Adduchi is well aware of.

Fashion for him is not a product, it’s more a process, “I enjoy the journey much more, and the people I get to know, because there are many people involved in it as a result of the details I choose.” In this vein, he told me the story of a leather jacket he was in the process of putting together, and which will feature in his forthcoming show.

To begin with, he says, “it took ages to find the right kind of leather.” Then, having found it, he took it to a seamstress based in a small village in the south of the Netherlands, who would make it into a jacket. The day he travelled to the village just happened to be the day that the Barcelona attacks occurred. Unfortunately, being in the middle of nowhere, he didn’t have enough reception to contact his Barcelona friends, or to find out where he needed to be. Meanwhile, it was raining, and he had had to try not to get the leather wet.

Needless to say, he was stressed out. But, in the end, he got to the lady, sat down and had a talk with her for two hours. She made him tea and then dinner. Then she made the leather jacket. Two days later she returned it. As we spoke, the jacket had to go all the way to Marrakech, to be embroidered by someone he knows there. Karim was even planning to go there to meet the embroiderer.

“Now,” Karim said to me, “every time I see this jacket, the whole story of its production is going to come to my mind.”

I should say that any talk of stories gets me going. To my mind, they have special contemporary importance because they’re so clearly under threat from modern life, which is always more oriented around people’s desire for instant gratification and the newest thing. Unlike the news, content, and, indeed, fashion, which all satisfy this desire, stories last a long time. As Walter Benjamin put it in his excellent essay “The Storyteller”, they leave gaps, which the audience can fill in with their own experience.

This sentiment is echoed in his short film for his first show, about how his grandma and his mum used to tell stories, and how they used to leave the story unfinished, as a way of maintaining anticipation for the next day, to keep the power in the household. At one point the narrator says, “what is not said, is just as important as what is”.

Speaking of his intention for the film, and the accompanying collection, Adduchi explained that “in the western tradition, people are taught that if they have beauty, or smarts, or a talent, they should expose it, share it with the world. In Berber culture, the opposite is the case.” It’s a pretty straightforward observation, but it’s still an interesting response to Western society’s constant need for exposure.

As the business end of the conversation was approaching its conclusion and we were once again starting to lapse into idle chit chat, I was reminded to ask one final question: is there a space for what he’s doing?

“You have to make the space. That’s the mistake of most fashion designers, to look for where room has already been made. But in the end, they are unhappy”. It’s a sentiment that is quite fitting with his overall attitude, not willing to compromise his original, continuing, and likely never-ending desire to create.