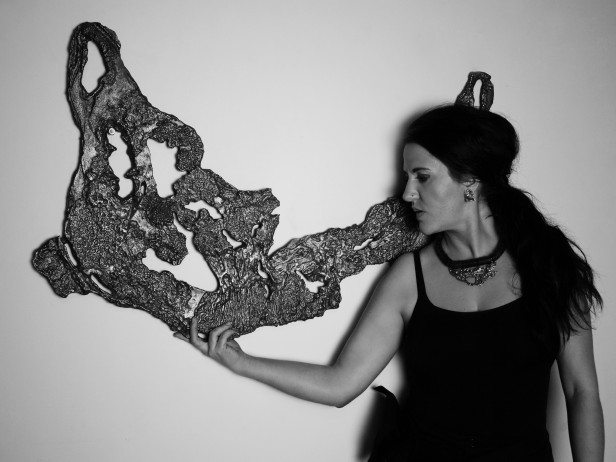 Born in Gdańsk, Poland, Jolanta has travelled extensively to develop as an artist, and in many disciplines at that. She is by now an accomplished sculptor, photographer, set designer and jewellery maker, and she loves to show people her work and the process preceding the finished product. ‘’I spent three years in Indiana learning metalsmithing. The jewellery I make are basically small versions of sculptures I would like to do.’’ She holds several degrees in a variety of artforms, and has recently worked on projects like Katibu Di Shon, the first opera sung entirely in Papiamento with well-known singer Tania Kross. Jolanta designed the sets, created video projections and made the costumes for the production. ‘’I didn’t sleep much.’’

Don’t hide in the studio

It sounds a lot like Jolanta, if it were possible, would prefer not to sleep at all. ‘’During the ten years I lived in Curaçao, I really worked 24/7. I did my own work, but also coached students wanting to study sculpture and ceramics in the Netherlands. On top of that, my studio quite quickly became more like a gallery, with people coming in to see what I was doing all the time. And that’s great, it’s really important to show people what you do.’’

Which brings us to Jolanta’s residency at WOW. ‘’I was looking for something like this to set up shop in Amsterdam, and it was the perfect match.’’ With an additional workspace on Prinsengracht, Jolanta reserves the raw experimenting for her studio at WOW. ‘’This is where I do the dirty work’’, she says, laughing. ‘’The good thing about a cultural breeding place like this is the cross-pollination of different disciplines: I have an idea for chocolate sculptures, for instance, working together with Shanour of GLOW Superfoods. Or one of the bands that work here, I’d like to photograph them wearing my jewellery. There’s something in it for everyone.’’

On the market, Jolanta will sculpt a head in clay based on a live model, allowing visitors a rare glimpse of the intricacies that come with sculpture. She will also be selling scarfs and blouses adorned with screenprints of her own photographs, harking back to the costumes she made for Katibu Di Shon. ‘’I want it to be simple but it never is’’, she sighs. ‘’Every project is somehow based on the previous one, in a continuous development. I don’t like showing the same thing twice.’’

Jolanta Izabela Pawlak is a creative multitalent (www.jolantaizabela.com) and exhibits all over the globe. On 30 May she sells her screenprinted accessories on the market and will make a sculpture on the day. Click here for the event.

This is where I do the dirty work