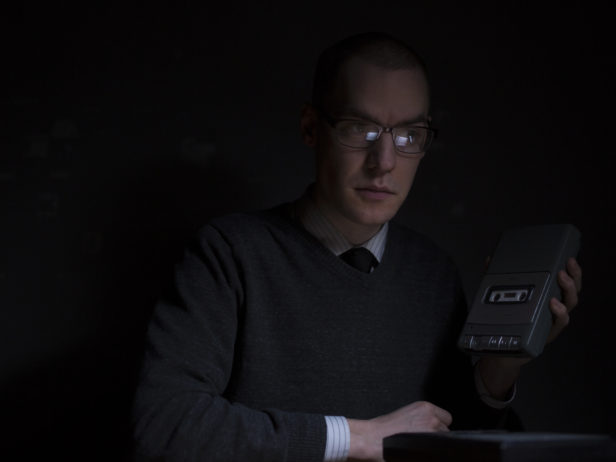 Virtuosity, tension of contemporary capitalism, attention economy. Billy Mullaney’s visceral performances and their heavy subjects aim to rip you right out of your comfort zone as a passive spectator, and straight into an experience where you can’t help but physically engage. Exploring the boundaries of performance art, dance, theatre, and everything in between, Billy traded his native Minneapolis for Amsterdam, where WOW forms the home base for his navigations through the unrestricted European theatre scene.

What made you decide to make the transatlantic jump from Minneapolis to Amsterdam?

I moved here last September to do a master’s at DAS. Theatre studies are very tiered in the US; you really have to go to Europe before you find one that’s about theatre production as a whole. I think that’s a decent reflection of how different the industry is here. The US is all about large theatre, and you have to pick a role to play in that. The European interpretations of theatre are far more diverse.

I was working as a math instructor back home, so it’s been nice to just wake up and be working on art all day long here.

Quite a contrast: math instructor and theatre artist?

I like to cryptically say: what’s the difference? When I taught math, I would always try to indicate some kind of choreography; there are choreographic aspects to be found there. There are steps you have to follow, and when you follow them right, you get the answers. Just like when you’re dancing.

That’s an interesting thought. How would you describe your job as a performer? Are you a dancer, an actor?

It depends on where I am! In Minneapolis, what I do usually isn’t seen as theatre. People tend to describe it as performance art, sometimes choreography. I work together with another artist, Emily Gastineau, who actually also goes to DAS (the two perform together as Fire Drill) and she comes from a dance background. When we first met, I was tired of theatre and she was sick of dance, so we’re both always pushing against what we are. The performances we do meet somewhere in the middle. I’m very excited that the programme in Amsterdam has such a broad understanding of what can constitute theatre. Basically, anything that happens in a theatre setting is theatre. Or not! [laughs].

That sounds mysterious! Can you tell us a bit about the kind of performances you create?

When I’m creating a new performance or thought experiment, I like to look for some kind of urgent contradiction. When Emily and I started working together, we talked about this idea of virtuosity and why people actually come to watch dance or theatre. This lens of virtuosity tends to ignore how a performer feels, and we were interested in how we could indicate the impact of movement on the body. If you watch someone spin in circles twenty times, you’re probably going to think ‘that’s not good for you’ instead of ‘oh that’s cool’. That train of thought led to a performance where we danced until we vomited. Over time, the audience would start to get what we were doing. It became hard to watch it for its aesthetic qualities; it was very clear that it was miserable for us. There was a really interesting tension between people wanting to keep watching but also wanting it to stop.

It sounds like a very physical experience for the audience as well.

Totally. We’re fascinated by this tension between revulsion and wanting more. In one piece we made ten performers compete for the audience’s attention. The one thing that always worked was running and screaming across the stage. It feels bad as a performer to do that because it’s such a base, easy method, but it also feels bad for the audience members because it works every time, you can’t help but look. It’s a reflection of the attention economy, a model for the free market, in which you have to compete if you want attention. After the performance, one of the audience members said ‘there was no amount of attention we could give you guys to make you stop.’ Our economy is like that as well. You will never get to the point where you buy enough hamburgers from McDonalds that will make them go ‘ok we’ll stop showing you commercials now’. There’s a drive in all of our performances to expose these kinds of contradictions. People tend to walk away not necessarily knowing what we were trying to do, but feeling it.

You’re working on one-on-one performances now, how do you create that same visceral experience there?

My master’s research is focused on that. This performance uses tarot cards, and was based on the thought that in 2018, it’s hard to trust the classical representation process. If I’m telling the story of Romeo and Juliet, I no longer trust people to see it and relate, to think ‘hey, I’m like Romeo, that’s me up there’. I think the only way to evoke that sensation is if I’m literally telling you the story of you. It’s a second person narrative, the ‘once upon a time’ becomes your own story. The cards seem arbitrary, but people are willing to have their line of thought intersected with these symbols. I’m trying to shape it into a piece for multiple people, but perhaps if you introduce a group aspect to it, people don’t go to the same place, mentally. Maybe I’ll spend two years on this research and conclude that it doesn’t work. I’m probably fine with that.

Is that the kind of performance you could do at WOW?

Hopefully! When I applied to live here, I was told they haven’t really had many performance artists yet. There are a lot of visual artists, and the way they contribute is to make art for the gallery. I can’t really do that. But the hostel guests stopping by at WOW do make for an interesting audience. Even if they’re only here for a few days, it’s like a continuous group of subjects for my research! We’re trying to figure out how to make that kind of programming happen.

Just living here has been great though, in this hive of people all doing their own thing. I get a kick out of people who are passionate about their work.  When I run into my neighbours in the kitchen here, it’s never ‘hey how’s the weather?’ but always ‘hey, tell me about this thing you care deeply about, here’s the thing I care deeply about’. Everyone is here because they’re trying to make it, more or less on their own, which makes for a strong and inspiring community.

If I’m telling the story of Romeo and Juliet, I no longer trust people to see it and relate, to think ‘hey, I’m like Romeo, that’s me up there’.