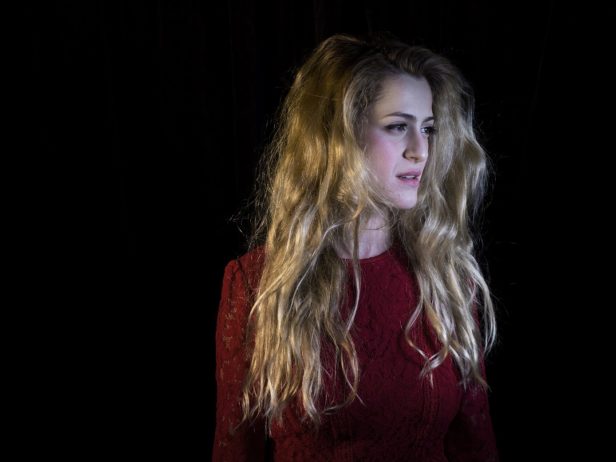 The role of the artist is often the one of the outsider, just on the fringes of society, looking in. Half-Palestinian, half-Romanian artist Inas Al-soqi has claimed this role with conviction, filling her collages with the kind of political satire unique to someone with the perspective of a permanent foreigner. Sometimes confronting, sometimes uncomfortable, always intriguing, Inas’ work is that of an astute observer, willing to point out the flaws of societies past and present. In her short residency at WOW, she delves into the hidden complications of Dutch history, and the ever-changing story of the immigrant.

When I meet Inas at WOW’s front entrance, she’s carrying a backpack with a large roll of paper. As a painter turned collage artist, paper is at the base of her art practice, although she does use different materials every now and then.

“Oh! I forgot to get sandpaper. I’m working on a wood carving right now. Do you think I can get sandpaper somewhere around here?”

Inas is an energetic, exuberant presence, and the absolute devotion with which she talks about her work and her life as a world-travelled artist can’t be anything but contagious. Her collages tackle important, complicated and often dark topics, but Inas’s inspiration doesn’t necessarily come from a world of pain. It comes from a desire to express her view of the world as an immigrant, as an outside observer in the role of the artist, always just on the outskirts of society looking in.

“The story I’m trying to convey with my work is the story of an immigrant. I’m trying to remind people to not forget their history. Don’t forget the wars, don’t forget that we all came from somewhere else, and that we all have our own struggles. And that hatred will never bring you anything good. When has it ever? It would almost be nice if it did, show us that it works! But it doesn’t, not even in cartoons. Even Tom and Jerry end up sitting together eating cake. [laughs]”

Inas was raised in Kuwait, where she lived until she was 10, when she moved to Romania. At 15, Inas and her family relocated to Dallas, Texas, just a few days before 9/11.

“Moving to Dallas was like moving to Mars, it felt like being around completely different types of humans. I’m so used to people being warm. Arab culture is very warm, and Romanians – although they might look like they want to beat you up – are actually really welcoming people who just want to feed you and take care of you. American culture feels very cold when you come from that background.”

Finding her freedom up north, Inas studies at the School of the Museum of Fine Arts at Tufts University in Boston, after which she heads to New York to get a graduate degree in Art Business at Sotheby’s Institute of Art.

“I didn’t think I could make it as a full-time artist, so I studied art business. In theory, mixing the business of art with being an artist sounds like a great idea, but in practice it really doesn’t work. You need a completely different kind of brain, there is just no heart in the business side. I worked at an auction house in Qatar for a year, and came back to New York about a year and a half ago to be a full-time artist. Which basically means working in a restaurant to pay the bills [laughs]. But I can’t help it, art is everything to me. My life has been so bizarre, moving countries and continents, learning different languages, but art was always there, like a crutch.”

To Inas, making art is an essential part of daily life. Her collages are a way to channel her feelings and frustrations about the world around her, a very literal way of putting the pieces together until things start to make sense.

“With collages, I can deal. I don’t go to therapy, but carefully cutting all those images and putting them together is a way for me to deal with a specific subject in history or everyday life. It helps me deal with my ethnicity and with being a woman, for example.”

Looking around Inas’ room at WOW, several large collages stand out. There’s one in shades of red, where cut-outs of different kinds of women seem to blend in seamlessly with images of exposed tendons and meat. Another is entirely grey, showing cut-outs from history books and newspapers, evoking a certain sense of uncomfortable foreboding of something that’s already in the past.

“I come from two extreme Easts, my collages are either very colourful, or very grey. The grey is what I think of when I think of Romania, I’m not sure why. Maybe it’s because of the history, and I see this eternal pain of the people. They’ve never been able to really come out, there’s always something holding them back. The Austrians, the Turks, the Russians, and now just their own government. In terms of topics, I talk a lot about war, because those are pretty much my first memories. The Gulf War, and then coming to the States right before 9/11 and facing that hatred afterwards, and the Iraqi war. Here in Amsterdam, the Second World War is always present somehow. During another residency in the Bijlmer, I learned a lot about Indonesian and Surinamese history. That large grey collage is about Java. It’s an interesting part of Dutch history, a little hidden under the rugs. It’s there if you want to find it, but you have to look.”

Inas was invited to join WOW as an Artist in Residence for a month, but decided to stay a bit longer to get the most out of her time in Amsterdam.

“I kept asking for more and more, and luckily they’re letting me stay for a bit longer! The people here at WOW have been incredibly supportive. It’s funny, the collages I usually make are fairly small, but since living in this room I started making much bigger pieces. I found this place in the north of Amsterdam, the IJ-Hallen? It’s a giant flea market, I was there forever just browsing through all the treasures and materials. All the collages you see here were made from materials I found at that market. The neighbourhood around WOW has been a huge inspiration. I woke up here on my first day and realised there’s a lot of immigrants around, and there’s a kindness towards that in this neighbourhood specifically. I find this place very fitting for the kind of work I make.”

“My story, the one of an immigrant, is the story of many around here. It’s something I relate to very strongly. I’ve always had an accent, and even though I’ve lived in the States for 15 years – basically half my life – I still get asked where I’m from every single day, and it makes me want to scream. They might ask that question here in Amsterdam as well, but it’s less accusing. It’s ok to be an immigrant here, if you see this as your home, it’s your home. I’m never allowed to feel at home in New York, you’re always a foreigner. They forget that the USA is just a 300-year old country, and that everyone is from somewhere else. And with this idiot in power, it’s almost like being racist is accepted and that’s terrifying. It happens here as well, I’m sure, but it could never gain ground like it does in the States. In the end, you go to a coffee shop and see a tall Dutch man sitting next to an Arab, sitting next to a black guy with dreads sitting next to a Spanish dude, sharing a joint.

And I read somewhere that in Amsterdam, there is more art per square meter than anywhere in the world. How great is that?”

Curious to hear more about Inas and the issues she addresses with her collages? Join us for an Art Talk in the Green Gallery on 13 April, or visit her work at WOW @KunstRAI 2018.

My life has been so bizarre, moving countries and continents, learning different languages, but art was always there, like a crutch.