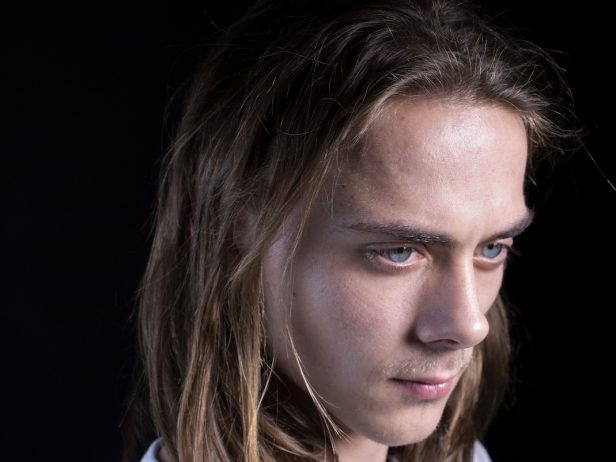 When you think of a mime player or artist, you probably imagine a pierrot, face painted white, Breton-striped shirt, little black beret, trying to escape from a non-existent box on a city square somewhere. You might not think of two actors dragging each other across a stage, creating a visceral, physical performance you can’t help but feel in your bones. For Hidde Aans Verkade, the latter situation is his realm within the mime world. Telling a story through movement and expressing emotions with his body, Hidde creates energetic performances that reach into our most human, physical selves.

Hidde, you graduated from the Academy of Theatre and Dance last year. What are you up to these days?

This past year, I’ve been writing and playing my own performances, as well as playing with others. It’s about 50/50 my own work and other people’s plays, which I really enjoy. My former classmate and collaborator Koen van der Heijden and I are also in the process of setting up our own theatre company, and currently looking for a name, the right partners, foundations and production houses that might want to work with us. We create physical performances, always looking for the limits of our abilities, right up until the edge of exhaustion. It’s an athletic and acrobatic kind of theatre, but not like a circus. We don’t focus on tricks; rather, we focus on the poetics of physical performance. The way we work might be similar to Marina Abramović. It is performative, in her case sometimes extreme, but always with a clear purpose, an action that develops by constant repetition. You might not find us on stage with a bow and arrow pointing at each other, but we do look for a heavy, physical way of play, trying to trigger transformation by repeating actions.

What attracts you to such physical theatre?

I was a very active child, always dancing, really into breakdancing. That’s what kickstarted my journey into theatre and performance, and how I got the idea that I wanted to be an actor. I was right in between these two worlds, acting and dancing. I went to a dance audition once and immediately thought: nope, these are not my people. What they do is beautiful, but just not for me, personally. But I kind of felt the same about the acting world; it was closer to what I wanted, but not close enough. I think it has to do with the fact that I’m always playing and performing with my body, on an intuitive level. A while ago, I auditioned for a movie, and the director gave this psychological background of the character, you know, to get you to relate to the role. But that does nothing for me. It’s much easier for me to relate to a physical trait. I’m so connected to my body, physical expression is really the drive behind a character for me.

You studied mime, which for most people conjures the image of a mime player trying to escape from a fake box. What’s mime school really like?

Well, it’s not like that! We’re not even taught that [laughs]. Mime is a very broad subject, and covers basically anything to do with body language. The essence of the course’s philosophy is Étienne Decroux, a French actor who created the idea of corporeal mime. He looked at theatre and thought: it’s nice how everyone is talking and performing, but I’m only seeing talking heads and silent bodies. He wanted actors to move more, even though he was also a linguist and loved language, he thought it was odd how the body gets neglected when it comes to communicating. So he created a body language he thought actors should learn, and that’s at the core of my education. And you can go just about anywhere from there. Some of my classmates turned to classical theatre, others to dance, one guy is doing light design and performance installations. And for me, it evolved into creating my own physical performances.

You graduation project, The Place to Be, received a lot of critical praise. Can you tell us about that performance?

I created it together with Koen, and it’s a story about two men in a senseless world, trying to find meaning. It’s also about dependence, because they’re stuck in this world together and need each other to make the best of it. Our inspiration was the Myth of Sisyphus by Albert Camus: the endless repetition, the constant working and suffering in order to make something of life, again and again. While the audience is still finding their seats, one of us is on the floor, and the other, in this case me, on top of this structure, these bleachers. I walk down, roll Koen into a ball, and roll him up the structure until I get to the top. When I sit down, he walks back down, lies down, and the process starts all over again. After a while, we both melt down to the floor, like we’re giving up, but I choose to walk back up. Koen follows me, stops me, drags me back down, and I help him get back down, and that repeats itself over and over. Until eventually, after pushing me down on the floor and reviving me, Koen starts to climb on me until he’s standing on my back, and then he fells and I stand on his back. It’s a very tough, taxing performance. When we were on tour, performing four to five times a week, three weeks in a row, it was a bit much. The performance held up, but we were exhausted.

Do you think the story you’re trying to tell with that performance needs that rough, physical aspect to really come across?

What I like about people performing these kinds of simple gestures is that there’s such a poetic power hidden in bodies and movement, and a pure simplicity as well. As the audience, you can interpret the performance any way you want, feel what you want to feel, create your own connections. There’s still an obvious thought process, of course, but the audience can still follow their gut reaction. Instead of having to think about what you see and hear, you can feel what you see with your own body. When you see someone lifting something heavy, you can feel what that’s like. When you see something fall, you feel it in your legs, your own equilibrium. It’s a different experience from thinking about a play in a conceptual way. With language, you might be more tempted to try and understand what’s happening. A physical experience is an understanding on a more visceral level.

Where do you find inspiration to create performances like that?

I read a lot, anything from novels to philosophy to history books. I start with a certain feeling, and a title. For my next project, it’s When in silence. I look up books and movies and music that have a connection to this theme, and dig into why that sentence appeals to me so much, why I feel driven to make something out of this sentiment. I write everything down at random, edit my thoughts and ideas and work out the performance. I always share my ideas with the people around me to fine-tune the concept: someone’s else’s vision might just give it that surprising twist.

Have you worked on anything with the others artists at WOW?

I only moved here two months ago, but already discussed working on a project together with my neighbour, filmmaker Roman Ermolaev. I gave him a short pitch of my idea yesterday, and he said let’s do this! It will be my first venture into film, so I figured I had to work with someone who is an expert in that field, someone who can make both practical and creative contributions. I think it will be interesting to figure out how to convey that physical aspect of my work on film. It might be a very different way of filming, meaning it will be a challenge for both of us!

What I like about people performing these kinds of simple gestures is that there’s such a poetic power hidden in bodies and movement, and a pure simplicity as well. As the audience, you can interpret the performance any way you want, feel what you want to feel, create your own connections.