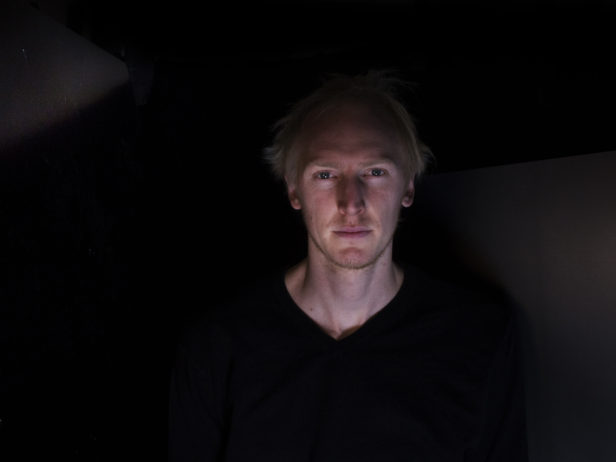 Outlines of houses sinking into the ground, evoking a melancholic sense of space and time. Gaspard Combes Feet of Clay, now on display in WOW’s Green Gallery, continues the artist’s explorations into the identity and movement of space. The interior architect turned artist joined WOW last year as an artist in residence.

Gaspard, you’re originally from France. What made you come to Amsterdam?

I was studying interior architecture in France, but it wasn’t really for me. I wanted to switch to fine arts, but wasn’t a fan of the mentality in French art school. I don’t hate it, it’s just a very different way of teaching. There’s a hierarchy, it’s less open-minded. Rietveld is more open, both figuratively and literally. It’s this nice glass building where you can see through everywhere, such a different, welcoming vibe.

What was it about interior architecture that didn’t suit you?

I was interested in architecture and sculpture, and its relation to public space. When you’re a kid, and you want to be an artist but you’re not sure if you’re good enough, you’re more likely to choose something like interior architecture. It’s more commercial and practical, but in the end we were creating interiors for restaurants and figuring out how to best use a table. I slowly started to realise that the practical side was never my focus, I care more about shapes and volumes and what kind of story they can tell. That kid you once were comes back to tell you that actually, maybe you are an artist after all.

We’re glad you figured that out! How would you describe what you do now, as an artist?

I tend to dabble in a lot of different artistic practices, but right now the focus is mostly on sculptures on a human scale. I like the idea of influencing space and movement with my sculptures, and if the sculpture is small enough it invites more interaction. I love sculptures in general, but they can get a bit stale sometimes. I like to create a movement with my work, or imply a movement, or encourage one.

This idea of space and movement goes back to that interior architecture background, but also to my mother and grandmother, who were both dancers. I also have a lot of friends in the circus, where there’s a lot of object theatre. A trapeze is an object and a sculpture in a sense, and you have to move around and with it to create that performance. I like doing the same thing with my sculptures: create a set-up where something could and should happen. It can be quite hard to relate to a sculpture when there’s a fence around it and you’re only allowed to look.

What would you like people to experience when they see and interact with your sculptures?

I want them to experience the space, which is a fairly abstract concept. Space can be very heavy, or very light, and you can move through it. That’s why I like adding performances as well because you can give this dynamic, volume and context to the space. For example, if you have a sculpture shaped like a wave pointing to the sky, it might feel like it’s moving upwards but it’s really not going anywhere. If you have someone engaging with that movement next the sculpture, it emphasises what you want to say.

The work you made for WOW’s Green Gallery, Feet of Clay, also has that sense movement, a sense of falling down.

Definitely. The beams are shaped like traditional houses, slowly sinking and falling into the ground. The title refers to a story in the Bible, in which the king of Babylon dreams of a giant with a golden head, silver breastplate, bronze legs, and feet of clay. The dream is a prediction: no matter how much shiny stuff you have, those heavy feet of clay will make it all fall down. I wanted to use the space of the gallery and expand it, make it a bit deeper and wider. It’s quite minimal, you only see the outline of a house, but your mind connects the dots like a constellations of stars, and you fill up the void with your thoughts about the house and create volume. In that sense, it’s also pretty interactive.

What has living at WOW been like for you?

It’s been great! Living here is like an extension of art school. So many creative people under one roof inspiring and helping each other. It’s a great base from which to start your art practice. For example, when I was working on a performance, I went over to my neighbour, who is a pop singer, and asked him how to best use words. He shared his knowledge with me, and we talked about the difference between the use of words in his craft and mine. Very inspiring! Or, when I’m drawing, I can stop by my illustrator neighbour who helps me look at my lines and critique my work.  When you’re just starting out on your own, it’s nice to be close to some feedback.

Besides the exhibition, is there anything else you’d like to accomplish during your time at WOW?

I want to make a comic book! I like to draw, but I’ve never really done it like that before. The story is just a happy narrative about my life in the south of France. It relates to this idea of space a bit because it talks about nature a lot, exploring the local rivers and woods. I like this idea of a personal comic book because I’m completely free to do whatever I want, and I can work on it in between other projects. Unlike sculpture, drawing is a pretty cheap art form. You only need a pen and a piece of paper, whereas with sculpture you need a clear idea and a scale model and the right materials and a place to store them. You can leave a drawing notebook in your living room, but you can’t really do the same with a block of cement!

You can visit Gaspard’s latest work in the Green Gallery until 8 April.

Living here is like an extension of art school. So many creative people under one roof inspiring and helping each other. It’s a great base from which to start your art practice.