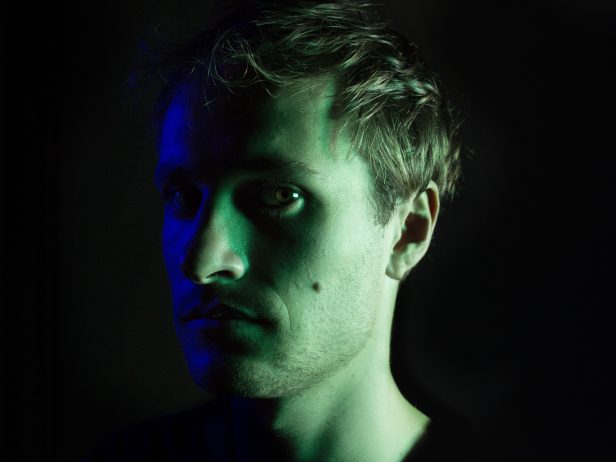 Playing music the way it might have been played centuries ago, studying notes to discover what they must have sounded like way back when. And finding a way to bring this early music to the ears of the twenty-first century listener. That’s what Emmanuel Frankenberg is all about. The half-Dutch, half-Swedish musician specialises in historical keyboards and horns, playing concerts all over Europe and beyond. As a champion of early, classical arts, Emmanuel might seem like the odd bird out at WOW, but as someone looking to build bridges from the classical world to modern art, he’s in exactly the right place.

Emmanuel, you just got back from Italy this morning?

Yes, I flew there yesterday, played a concert last night, and flew back to Amsterdam this morning. I’m not home much these days, I’m actually heading to Copenhagen tomorrow. Sometimes I’m home for weeks, sometimes I’m in and out for months. I do like it though, it’s nice when you travel a lot, you sometimes forget where you are, or what day it is.

How did you get into early music?

My whole family is full of musicians; my parents, brother, aunts and uncles, grandparents, almost everyone. So I’ve been playing music since I was a little boy, and I just kept doing it because I think music is so beautiful. I definitely wasn’t pressured into it, I considered a lot of different options. In high school I wanted to study all kinds of things, I still do. Music is wonderful, but there’s so much more. I’d love to study something a bit more intellectual.

So why choose early music then?

The great thing about what I do – I play early music on historical instruments – is that it’s often a very different way of approaching classical music, there’s a lot of research involved. Classical music can be a fairly standardised practice: the whole repertoire from the 1500s until what’s written now is often played by standardised instruments. Back in the 1960s, a movement was started by people who wanted to do things differently. That movement is all about going back to playing on historical instruments; back in the day, instruments sounded very different than they do today. A flute was made from wood, not metal, you didn’t have a piano but you did have a harpsichord. To play early music with these instruments, you have to do research about what the aesthetics were back then, how did the instruments sound, what was the phrasing, the rhythm and pace. There’s no way to know for sure, but we try to get as close as possible. The results sound so different from some of the classical music we are used to. So I play an instrument, but also do lots of historical research, and the results are so beautifully inspiring.

How do you research something like that? It must be difficult to find out what something sounded like centuries ago.

You try to use all the sources you can possibly find. In the 1700s, treaties were written on how to play the violin, for example. You can find a lot of information there. But you have to understand the terms in the context of the time period as well. What was fast or slow back then? You look at images and paintings of the instruments, check encyclopaedias of that time to see what the descriptions of specific musical terms were. All that historical research combined can tell you something. What you find out might even go against everything you thought you knew about music. You might find out a specific piece of music that’s been played one way for hundreds of years is supposed to be played very differently. It will sound weird at first, but in my opinion these results sound much more convincing, and enrich my musical understanding.

We’re so conditioned to expect classical pieces to sound a certain way, I can imagine many people listening to these alternative, historical versions thinking “this can’t be right”

Exactly. Unconsciously, you can be used to certain mannerisms and dogmas. What I really stand for is that we handle old, historical music in a historically informed way. It simply won’t sound as convincing if you don’t. Still beautiful, but in general I think it’s far more convincing if you consider the history of the music and what it could have sounded like when it was written. Many young people don’t listen to classical music these days. On the one hand, I don’t get it because it’s such a beautiful, deep and incredible art. On the other hand, I often hear music performed in a way that I think doesn’t make any sense, and then I can imagine why people don’t feel the music. I think going back to these historical roots is important for the revival, and survival, of classical music.

Can you describe the difference between playing with old and new instruments? If it can be described in words, that is.

It’s a combination of things. There’s a certain aesthetic you create through the sound of the instruments. A grand piano has a heavy sound, a bit muffled; a beautiful instrument if you want to play modern music. But it obviously sounds very different from the harpsichord or another historical keyboard instrument. You can’t create the same sound with a modern piano. It’s also about the techniques used for playing. People often don’t like opera, the loud singing, the vibrato, I don’t like it either. But that technique, the loud voices, is something fairly new, probably developed at the start of the 20th century. Back in the day, it might have been just a regular singing voice, and everyone loves a good singing voice.

How do you think you can get the average music aficionado like me to get to know that world?

I think education is essential to reconnecting people to classical music, learning the language. If you don’t speak the language, you just won’t get it. Being open to the experience helps, but you need to know certain things to understand it. The same is true for every type of art. If I look at a Rembrandt, I probably won’t get it the same way as someone who was educated as a painter.

How can we start teaching people that language?

That’s a tough question. Maybe it’s something that almost has to be forced on you as a kid. If I were to raise someone, I would want them to get to know all of the great classics and then let them decide whether they like it or not. You have to listen to a lot of early and classical music to really understand it, and that’s not something you can force on an adult. There are projects happening to reconnect younger generations to classical music, crossover concerts with DJ’s and orchestras. And I’m sure lots of people will enjoy that, but it doesn’t serve the survival of classical music. It doesn’t teach people about the essence of the music, or what sets it apart from popular music. If you go to a crossover concert, you don’t see anything new, you don’t learn about the traditional values of the art form. Classical music is different, not better, but different. That’s where the focus should be, to help people develop the concentration and appreciation needed to concentrate on a piece and listen to all those layers. It’s a different listening experience from popular music. How we’ll teach people that? I honestly don’t know yet.

At WOW, you’re a classical artist surrounded by a lot of modern art. What’s that like for you?

It’s great, actually. We have a lot of discussions about art and aesthetics. I’m pretty traditional when it comes to art, not in a negative sense, I’m open to new things, but not for the sake of being new. It always has to serve the beauty of the art. But everyone here is very open, we always find a place of agreement at some point. I’ve done several collaborations, wrote a lot of songs with my neighbour Jasper. I’d come home after a concert at night, all tired, and Jasper would pop out of his room and say come on over, let’s record something, it will only take a second. And we’d end up sitting there all night.

That sounds like a good way to bring your specialisation amongst younger, different people as well.

Definitely. I get the opportunity to do a lot of different, more modern stuff here.

Do you have certain goals you’d like to achieve over the next few years?

My only goal is to create unforgettable moments with music on stage, touch people and involve them in the story I’m trying to tell with the music. I want to play for everyone. Everyone like me, and everyone who is completely different from me. I know that’s not realistic, because it’s a type of music you have to understand. My goal for living at WOW is to take advantage of working together with conceptual artists, and learn things from them. I believe we all have to keep educating ourselves in every which way. If you don’t know something, go back to school and learn.

I think education is essential to reconnecting people to classical music, learning the language. If you don’t speak the language, you just won’t get it.