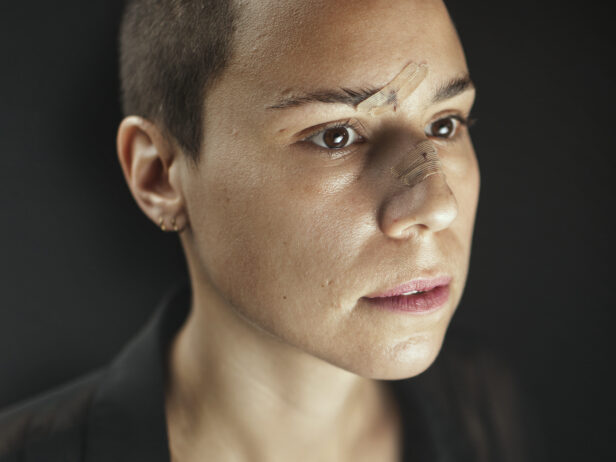 After graduating with a master’s degree in architecture at École Speciale d’Architecture, Natacha Mankowski (1986, FR) worked with Vito Acconci, Jean Nouvel, Anne Demians, and Dominique Perrault. In 2012, Natacha won the Tony Garnier Prize for Architecture and Urbanism awarded by the Académie Française d’Architecture. From 2014 onwards, she became a member of the Taylor Foundation. That same year she makes a U-turn into art and begins her first art residency of many.

“I was just missing creating on the day to day. With architecture, you have such a long span of time until you get something built. It’s also a very administrative work. I didn’t feel totally myself. (…) In a way, I entered painting through space. I was studying a lot of abandoned buildings, empty rooms, and I would draw that. I used architecture as a way to paint, and I still do. When I go on residencies, I visit specific spaces: quarries, dry docks, big empty structures built by humans in nature. It began with this idea of looking for unwanted architecture or resulting from the hand of man. I would paint that, and I still do. (…) I was never someone who was based somewhere. Every two-three months I would go on residencies. This is how I started my work as a painter because I never had an art education in college … So I decided I would teach myself through those residencies. I tricked the system a bit, but in a good way! I entered this residency about urbanism and public space using my architecture portfolio. Arriving there I said ‘okay I am just going to paint spaces’. I switched the whole perspective of my work but they were really open-minded with this.”