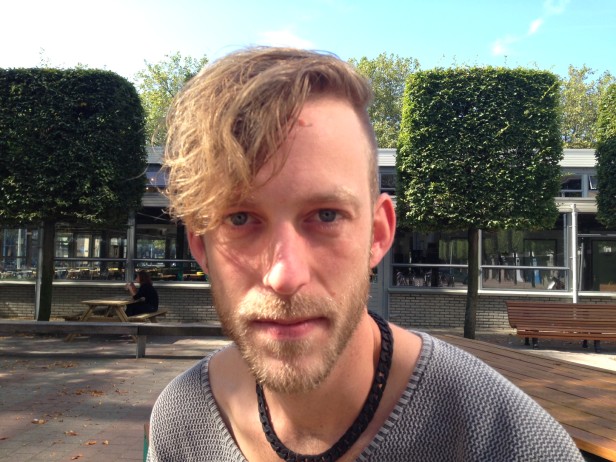 Bas left his home in the inner city to move to WOW! Read how he feels about creative factories…

Why are you involved in WOW? What interested you in WOW?

I’m here via the 3Package Deal of the Amsterdam Fund for the Arts and Bureau Broedplaatsen. Besides a development budget and guidance for a year, I was offered accommodation in WOW. The vibe and the people convinced me to swap my house in the Nieuwmarkt neighborhood for a studio in WOW.

Can you tell us something about yourself and your work?

After graduating from the Amsterdam Theatre Academy I traveled around the Netherlands and Europe with amongst others Stichting Nieuwe Helden (New Heroes Foundation), Schwalbe and MTG Blont to make raw art performances. I am constantly looking for cross-over between performance and music. With a congenital itch for Musicals I experiment with new forms of theatre music. With my Elektro Pop project BASTIAAN we are working this season on a staged concert that will be on show at both festival, pop and theater stages. Check BASTIAANmusic.nl for more pictures and music!

There is a debate going on in Amsterdam on the role of artists and especially the creatieve factories (broedplaatsen) and their role in urban renewal. Some find that artists are used as cheap lubricant for urban renewal, others believe that providing creative factories does have a positive and lasting contribution to community regeneration can. What is your opinion?

An artist should always function as lubricant … between content and audience. I think it’s an exciting idea to work in a neighbourhood that exposes some fringes. I have always felt the urge to bring my performances to places that are not polished and neatly framed. Whether it is political legacy in this case – letting artists ‘solve’ urban problems – I wonder. And if it was.. for me WOW stands for the confidence that the AFK has in me and it is simply an inspiring environment in which to create new work. It’s nonsense to suggest that politically driven sites would exist where the success of a creative career is a guarantee.

You just performed at the Parade festival. When and where can we see you perform this month?

Upcoming season I will be writing with BASTIAAN the music for the theater performance ‘Think’ of DOX. Next summer we will present the results of a yearlong 3Package Deal, amongst others in the Tolhuistuin and the Parade. And this fall we will do a gig at an event in November in WOW!

I think it's an exciting idea to work in a neighbourhood that exposes some fringes. I have always felt the urge to bring my performances to places that are not polished and neatly framed.