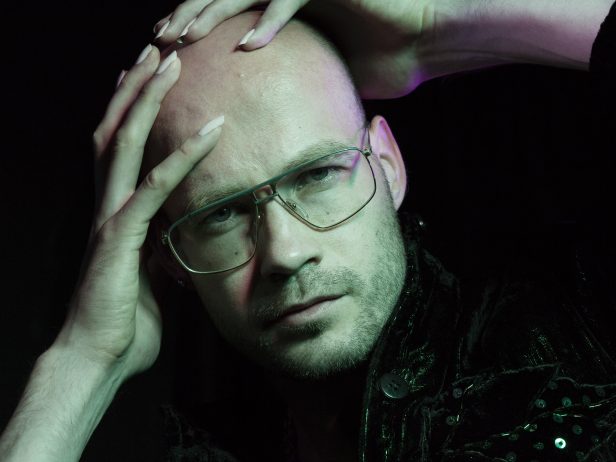 Arie de Fijter is one of those artists who subtly defies definition. With a background in architecture, you might expect him to create practical objects and tangible installations, but Arie’s work is something a little more out of reach. His objects and performances are personal experiences, reflecting whatever he might be going through in his life at the time. It’s this private aspect, these personal tales, that make his work oddly relatable. With his heart on his sleeve, the artist in residence gives us a small glimpse at what inspires his performances. “A performance can express whatever you go through in that moment. You can put on a giant mask, but I’m an emotional person, so that’s what you’re going to see.”

Even when walking down a busy city street, Arie would be hard to miss. He’s tall and lanky, big glasses covering piercing but kind eyes. When he speaks, he reveals a charming Belgian/German accent, hinting at his varied international background.

“My parents are Dutch, but I was born in Luxembourg, where I lived for 15 years, after which we moved to a German-speaking part of Belgium in the east. I then studied in Liège, a French-speaking part, and came to Amsterdam three years ago,” Arie explains.

Before making the jump to Amsterdam, Arie worked as an architect. Three years at plusoffice architects in Brussels, and three years as a scientific researcher and teaching assistant in architecture at the University of Liège. His eventual and definitive switch to the art world occurred only a few years ago, when Arie decided to pick up a part-time course at the Royal Academy of Fine Arts in Antwerp.

“I felt like I needed a change. Things happened in my personal life that encouraged me to take a closer look at what I was doing, where my passion really lies, to dive deeper into who I was and what I wanted. Architecture is a field where you usually follow a set path, and that felt a bit suffocating to me. I wanted to find something outside of architecture that spoke to me,” Arie remembers, adding that perhaps, art was something he had subconsciously wanted to pursue all along.

“My father never wanted me to study at all. So architecture felt like a safer choice than art school. Getting him to accept that I was going to university was one thing, I can’t imagine what he would’ve said if I had chosen art school right from the start.”

To understand Arie’s art, the way he sees the world, and his belated venture into the world of performance, it might help to understand where Arie came from. His parents were missionaries, strict Protestants, who devoted their lives to spreading the word of God in the less religious areas of Europe. Everything at home revolved around religion, but outside of the home was a different, completely opposite world, one of non-believers where no one knew the stories from the Bible, let alone took them as the one and only truth.

“My school wasn’t religious either, so it was a very confusing way to grow up. It was hard for me to understand other people my age, which made me shy and quiet. These extreme opposites, what I experienced outside of the home and the way I was raised, led to a difficult, strained relationship between my dad and I,” Arie explains. Their problems never really got resolved, and in the same month that Arie received his acceptance letter from the Sandberg Institute, his father passed away. It wasn’t a sudden passing – the family had been preparing for it for a while – but the onslaught of grief released in Arie was something he hadn’t been expecting.

“I thought I was prepared, but I wasn’t. Maybe you can’t ever be. So those two years at the Sandberg Institute, my work revolved around grief. I wasn’t just grieving him, but also the person he never knew how to be for me. It was a grieving process about my youth, the intensity of it. Why did we have to go through this?”

Where Arie had initially planned to focus his time at Sandbergh on sculpture, the story of the scale model and how the object is never actually the object itself but always referring to a different reality, his grief pushed his artistic intuition in a different direction. Performance, rather than a static object, felt like the most logical expression of the turmoil of his inner world at the time. A physical, expressive art, one where emotions can be laid bare quite literally, no holds barred.

“I just wanted to show sadness, in a way. It still feels strange to me that in an art school or institution, at least in my experience, broad topics like gender neutrality, racism, and other social issues are so popular. But no one was talking about more personal things, like grief. Like those social issues, grief is universal, it’s everywhere. Although I don’t like expressing a topic in a universal way, I’d rather focus on the individual. If there are 50 people in an audience, I’d rather touch one person deeply than 25 on the surface.”

Developing his performances within the Immediate Spaces programme – a broad course focused on space, with a degree in interior architecture as the end goal – Arie managed to combine his background in architecture with his newfound love for personal performances. Although an interior design course wasn’t quite the right context for Arie’s work, it did help him develop a distinct performance style.

“My performances are a whole spatial package, where the architecture of the space and different objects are involved. It did spark discussions at school; since my objects have a certain design value, should my work be seen as design or performance? I once did a performance with a ceramic plate shaped like a landscape, and during the performance I told a story, using the plate as a reference for memory, a map for the story. At the end of the piece, I threw the plate on the ground. I understand that it can be confusing – was it about the plate or the story?- but it’s the combination that fascinates me. You don’t have to label it. My work is my work, and that’s what it is.”

It’s been exactly a year since Arie graduated, and his working life has been as varied as his performances. He did a residency at Sign in Groningen, creates performances as a duo with his schoolmate Ksenia Perek, and is still discovering who he is as an artist. Some see the early years of a career as torture, but Arie has decided to enjoy this phase of his life.

“You often hear established artists talking about their early works as the best time of their craft. So let’s all enjoy our early works, let’s just have fun figuring things out!”

You often hear established artists talking about their early works as the best time of their craft. So let’s all enjoy our early works, let’s just have fun figuring things out!