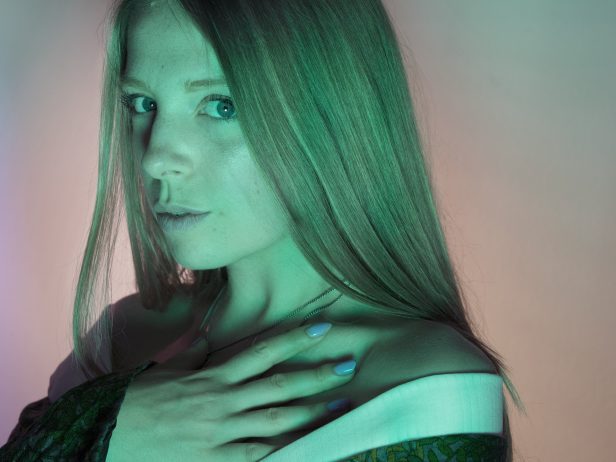 Just imagine. You get up in the morning, put on a plain skin coloured bodysuit, pick up your VR glasses, and browse through an extensive digital wardrobe. What do you feel like today? That flowery dress made from real, constantly blooming flowers? Those pants with the seams on fire? Or that kimono with a trail so long it would span from your doorway all the way to work, had it been real? It sounds like the start of a science-fiction movie, a future seemingly so far removed we can’t help but categorise it as pure fantasy. But to digital fashion designer Amber Jae Slooten, that future is right now.

You were the first to graduate from the Amsterdam Fashion Institute with an exclusively digital portfolio. What sparked your interest in digital fashion?

It started with a minor about the digitalisation of fashion. They were using software I didn’t really like, so I started doing research to see what else was out there and just got hooked. I was the only one doing it, so it was a big step for the school as well. They told me up front: ‘we’re not sure you can graduate with this, but we’ll see how it goes’. So I said ok, and went for it. For my graduation project, I developed a concept in which, in the future, people would wear holograms instead of clothes. There was a lot of push-back from teachers, but I’m very happy that I got the opportunity to visualise my vision on the future of fashion.

And what is your vision, exactly?

I make clothes without ever touching fabric. I design everything in 3D on the computer, and with that I save money, time and material and still experiment with infinite possibilities. Physically making clothes is an important process to learn – you have to know how to work with fabric – but after that it was just a waste of time. At school, we had to create three outfits a week sometimes. With that physical process, you spend much more time sowing and cutting than you do actually designing.

It’s very different, almost like sculpting. Normally you would draw or sketch, do pattern cuttings, and create a pattern for the sketch, which requires a good visualization of 2D into 3D. The benefit of digital designing is that you can adjust things very easily and immediately see what you’re doing in 3D. Whatever you drape on one side is directly visible on the other side, you don’t have to wait until you’ve sown it. You can keep changing things, which also makes it hard to stop. At some point you have to say: it’s done now. But technically, it’s never a finished garment, not until you sow it in real life. Which I don’t.

I think there are enough clothes in this world and I don’t think we need more. I hope that with digital fashion, we can create a new way of thinking about clothes. I read an article recently that said major retailers are sitting on 5.1 billion clothes they can’t sell. Brand new products, but because it’s outdated, it doesn’t sell. And they can’t sell it to second-hand stores either because it would devalue their brand, so they cut it up and throw it in the trash, or send it back to China to get burned. Can you imagine? Perfectly new clothes just get burned. I don’t want to be that environmental preachy person but come on, that’s just so unnecessary. We as a society are not evolving if we don’t think about a solution for this. We’re better than this. That’s also why it’s interesting to think about what we’ll look like in the future. What will we wear in a VR world, what’s our digital identity? I try to answer these questions in my work.

So in the future, we’ll all be wearing holograms instead of clothes?

The holographic outfit concept was inspired by the Magic Leap technology, where you wear glasses or lenses through which you can see digital objects in the real world. I figured we could wear skin-coloured bodysuits, and on top of that a virtual layer of expression. You would need just one of those suits, and if you go to a party and feel overdressed or underdressed, you can just download a new outfit! Clothes are more of an expression these days than functional garments, and we buy so many, but there’s no need for them to be real in a virtual world. With digital fashion, people could get much more creative. I mean, I can’t see myself in a virtual world wearing a tracksuit, why would you? Because it’s virtual, it’s not about comfort anymore, so what is it about then? A lot is possible when everything in possible. If you want a dress that’s on fire, why not? It’s all fake anyway, or is it? That’s a question I’ve been raising as well. What is this object I created? An actual thing or just 1’s and 0’s?

What do you think?

I think it’s real. Something digital can still give you emotions. When you receive a text from someone, it can move you. It’s almost this new kind of sense, or digital feeling we’re developing. It’s as real as real life. If you look at Instagram and see catwalk pictures of a fashion show, they’re just frontal images of the outfits. I’ll never see them in real life, you probably won’t either. So what’s the difference between a 3D digital render, and a picture of a model in an outfit? There is none, both are digital and still very real. Of course, it’s all a gradual transition. Ten years ago we couldn’t have imagined Instagram being such a huge part of our lives. And yes, the digital world, things like Instagram, has downsides. It’s always good to take a step back and check in with yourself, take some time away from that world. But maybe a virtual world could actually help with that. You could sit and meditate on top of a mountain if you want to.

This virtual world you’re talking about sounds like something from a science-fiction movie. Is this something you see happening in the near future?

Absolutely. There’s already a platform called Sansar where people can log in with their glasses and interact with each other. I think the transition will be very fast, I already see companies preparing and educating themselves. Magic Leap glasses will come out this year, and the rate at which VR and things like augmented reality and mixed reality are developing, I’d say we’re looking at maybe five years from now. People usually don’t believe me when I say that, but it really is the future. It’s like how people in 1999 thought cell phones were never going to be a thing, and look at us now. I can’t imagine anything else than this technology moving to our eyes so we can experience the digital world in the real world. I would rather see a digital world around us then having to look at the screen the whole time. It’s all just technology evolving.

How do people usually react when you talk about this future digital fashion world?

It’s usually somewhere along the lines of: that’s never going to happen. Some find it scary, one guy actually came up to me and said ‘you’re stealing my job, what are you doing. What I do is up against a very big industry, my ideas make big fashion companies obsolete, and that could be seen as a threat. But the transition to digital fashion won’t happen overnight. It’d be great to see some pioneers walk the streets with holograms and amaze people with what’s possible. Fashion designers will have plenty of time to adjust to this new reality. And clothing doesn’t have to disappear; there’s loads of people who still don’t have smart phones, for instance.

What kind of projects are you working on now?

I’m showing a project on June 24th during WOW FASHION INSIDE OUT. It’s an exhibition of a fashion line I designed in collaboration with an algorithm. We fed the algorithm pictures of Paris Fashion Week; one part of the algorithm looks at the pictures, the other part doesn’t but will create something that looks like the picture. It’s constantly guessing; is this what you’re looking for, or this? It’s about deep learning, the more he asks, the better and prettier the images become. And I used those images as inspiration for my new collection, together with a bit of my own inspiration because humans still do have a wider range of creativity.

Do you have any goals for the two years you will spend at WOW?

I’d like to make a name for myself, bring more awareness to digital fashion, do some big projects, travel internationally to talk about my work. My collections can go anywhere, you don’t have to ship them! I’d love to see more people all over the world get into it. It’s the future, after all.

Come take a look at the future of fashion during Amber’s exhibition during WOW FASHION INSIDE OUT on June 24th on Bos en Lommerplein.

Something digital can still give you emotions... It’s as real as real life.