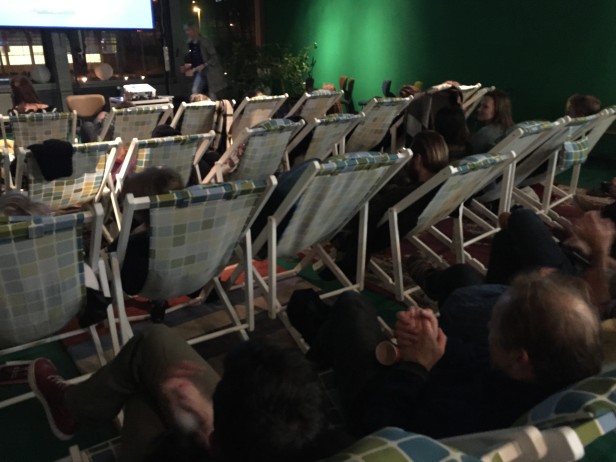 Last weekend we enjoyed a cosy winter night at WOW with hot soup and hot drinks. Under the title ‘OVERWINTER’ the public watched two short movies and the film ‘Eternal sunshine of the spotless mind’.

Saturday 17 January WOW organized a movie night in the warm atmosphere of the fashion exhibition OVERWINTER. On the occasion of the Amsterdam Hotel Night 2015 organized this cosy event which was accessible for anyone interested to get to know the concept of WOW; our hostel combined with artist in residencies and our cultural program. We invited the public to come to WOW to overwinter the cold, together with family and friends, sit with us under warm blankets and enjoy our hot soup, hot drinks and the winter movie ‘Eternal Sunshine of the spotless mind’, selected for us by West’ival. The program started with two short videos carefully chosen for young and old.

Fear of Flying: A bird with a FEAR OF FLYING tries to avoid heading South for the winter. A live-action-animated short film.

Goodbey Mister the Vries: (93) sits at his window awaiting his death. Until one cold winter day he is surprised by the arrival of a parcel. When he subsequently sees a pigeon flying off he knows that this is no ordinary message. His time has come. Mister De Vries momentarily hesitates to open it. When he chances it, he finds his old Frisian skates. There’s only one thing to be done…

Eternal Sunshine of the Spotless Mind is a 2004 American romantic science-fiction comedy-drama film about an estranged couple who have each other erased from their memories, written by Charlie Kaufman and directed by Michel Gondry. The film uses elements of science fiction,psychological thriller, and a nonlinear narrative to explore the nature of memory and romantic love. The story is about a man, Joel Barish, who is heartbroken that his girlfriend Clementine underwent a procedure to erase him from her memory. He then decides to do the same. However, as he watches his memories of her fade away, he realizes that he still loves her, and may be too late to correct his mistake. You can erase someone from your mind. Getting them out of your heart is another story…