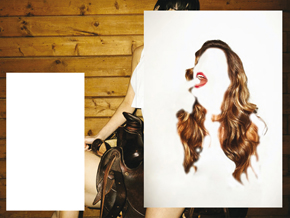 The project Hungry for Love is part of Céline Manz’ body of work What do you know about art, you’re not a lawyer. It explores the question of ‘Who owns the artwork?’ in relation to copyright law and the notion of authorship. Within this body of work, Manz published a practical guide for artists working with ‘appropriated’ contents from the Internet called The Appropriator’s User Guide. She continued her research in the series A1, 44 digital collages based on photographs by fashion photographer Terry Richardson. In this series, the popular photographer’s images are used as iconic representatives of a mainstream phenomenon known as ‘Pornification’. Manz exposes the visual language widely used in advertising by overdrawing satirically Richardsons images she ‘found’ on the Internet.

Hungry for Love was originally planned as a follow-up publication of the series A1, but soon turned out to be a project on its own. As a publication, Hungry for Love is the sum of virtual contents put into the new form of an artist book.

In collaboration with graphic designer Xavier Fernández Fuentes, the publication uses – same as in A1 – only content coming from the Internet. Fernández Fuentes juxtaposes Manz’s collages from the A1 series on top of images Terry Richardson shot for advertising campaigns of the fashion label Sisley. These campaigns, notorious for their explicit character, formatively changed the face of advertising and had a great influence on the generation both Manz and Fernández Fuentes belong to. One of these campaigns – called Hungry for Love – was the main source of inspiration of Manz’s A1 series. Interesting enough, the same Sisley campaign also served as a source of inspiration for Fernández Fuentes and triggered his interpretations of Hungry for Love, which are bundled in the publication as a visual essay with a strong narrative of its own.

Hungry for Love questions the notion of ownership over the rights on artworks that are virtually accessible. By making the publication available for free download as printable and view-on-screen versions and, thus, renounce the control over its distribution and financial revenues, it provokes to reconsider the meaning of artistic ownership. By informing Terry Richardson on the existence of both A1 and Hungry for Love, the question of ‘Who owns the artwork’ – and therefore the rights over its distribution – is put into a concrete perspective, going beyond the philosophical aspects of the matter. As Richardson’s reactions have been friendly but observant, the question whether he would claim a copyright infringement or attests the works’ autonomous character remains unanswered. Yet.

For the exhibition at WOW, extracts of the Hungry for Love publication are presented on billboards, bringing back the appropriated content of the publication to its original  – advertising – context.

See for more information the PERSBERICHT Hungry for Love.

The exhibition will be opened by Céline Manz at Wednesday 29 October at 7pm.